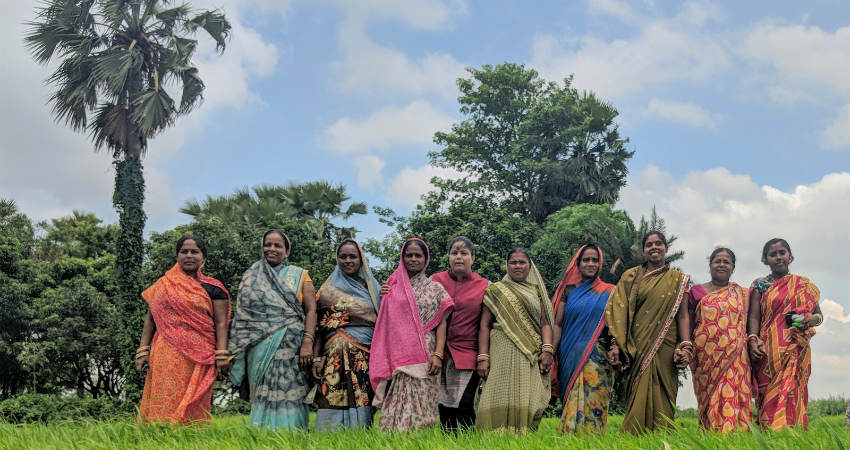 India is prone to various kinds of hydro-meteorological and geological hazards, especially droughts, earthquakes, floods, tsunamis, cyclones and landslides. These hazards threaten millions of lives and can cause large-scale loss-to people, infrastructure and the economy. Accurate weather predictions at the right time can go a long way in mitigating, if not in eradicating this crisis. In India, USAID has come up with a unique partnership with Skymet Weather Services called “Partnership in Climate Services for Resilient Agriculture in India (PCSRA)” to help digitalize the archaic methods still employed by the Indian farmer and develop new risk mitigation products. The duration of the project is 4 years (October 2015-September 2019) and it has benefited more than 80,000 farmers spread across 31 districts in 9 states- Andhra Pradesh, Telangana, Bihar, Gujarat, Haryana, Madhya Pradesh, Odisha, Punjab and Rajasthan.

This is where the PCSRA project comes in. It is helping farmers and vulnerable agricultural communities in rural areas cope with climate variability and make informed decisions by providing them with hyper-local weather information. To realize this goal, 675 AWS (Automated Weather Stations) have been installed to generate real-time weather and crop monitoring data to extrapolate weather parameters in the near term. The very striking feature of the PCSRA is it's technological and digital platforms that connect even remotely located beneficiaries to the set the services, which they can use for becoming more resilient towards the weather variability. Skymet has installed Automated Weather Stations, developed the SkyGreen and SkyMitra App and developed the Web-portal, exclusively for the project. Besides weather information, real-time weather-based customized crop advisory is also made available to the farmers. This permits the Indian farmer to make time-sensitive decisions regarding the varieties of crops, irrigation, pesticides, fertilizers and the like.

Skymet has developed two android based application named “SkyGreen” for registering the farmers, capturing and storing the details of them whereas “SkyMitra” is developed for delivering the services in the form of information. SkyMitra is a farmer-centric application that gives real-time weather information on an hourly basis, weather forecasts for the next 7 and 15 days, and agro advisories based on real-time live weather. 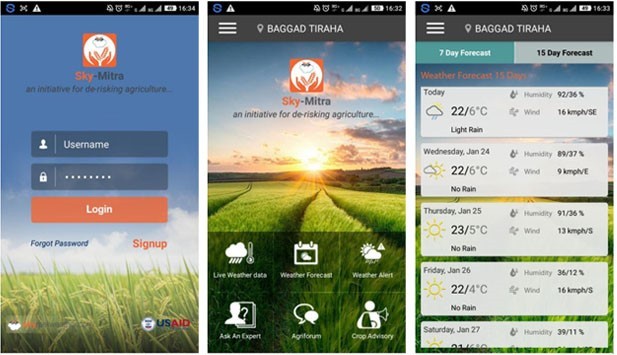 The most accurate and the most detailed of weather forecasts do not count if they do not reach the farmer in the remotest locations, with little to no literacy skills. Besides the SkyMitra app and WhatsApp groups, information is also promulgated through other mediums. A majority of Indian farmers do not have a smartphone. Hence weather information including weather forecasts and weather alerts are sent to the farmers through SMS in 6 regional languages, twice in a week. Weather Display Boards are placed in high visibility locations to reach out to farmers who do not have access to mobile phones. The display boards are updated periodically. Through VBS (Voice Broadcast Services), the weather information is disseminated to the registered farmers in six regional languages in the form of voice messages. There is a lack of a platform for the Indian farmers to voice their queries and gain access to precise and detailed answers to those queries. Hence, a toll-free number has been provided where one can dial the pin code number of their district to hear district-specific weather information.

Gender disparity is not a new or shocking event in India, as unfortunate as it may sound. Women in the capacity of wife or daughter help out in the fields but their labour goes mostly unpaid and unacknowledged. Due to cultural differences, it is difficult for our field workers to get the women farmers to register with us. During the third quarter of the fourth year, 2645 male and 91 female farmers were registered. Out of the total of 80423 farmers registered since inception, 72948 were male farmers and 7475 were female farmers. Although the share of female farmers in the last quarter was just 3%, it is three times more when compared to the total farmer registered since the inception of the project.

India is a study of dizzying contrasts. It’s hard to imagine that the country credited with launching the highest number of satellites in a single mission is also the country with almost 31 million homes with no electricity. This perplexing gap is the startling reality of our country. The disconnect between technological progress and technological impact needs to be bridged in order to metamorphose from a ‘developing’ to a ‘developed country’. Increasingly accurate weather forecasts will not facilitate agriculture if the right information does not reach the right person at the right time. And this is what sets the PCSRA project apart. With its grassroots approach, it aims to take all its specific and detailed weather predictions and insurance information to every disadvantaged farmer, and this is precisely what digitalization is all about- making the maximum impact on the maximum number of people.