The Making of a Tech - Savvy "Kisan" 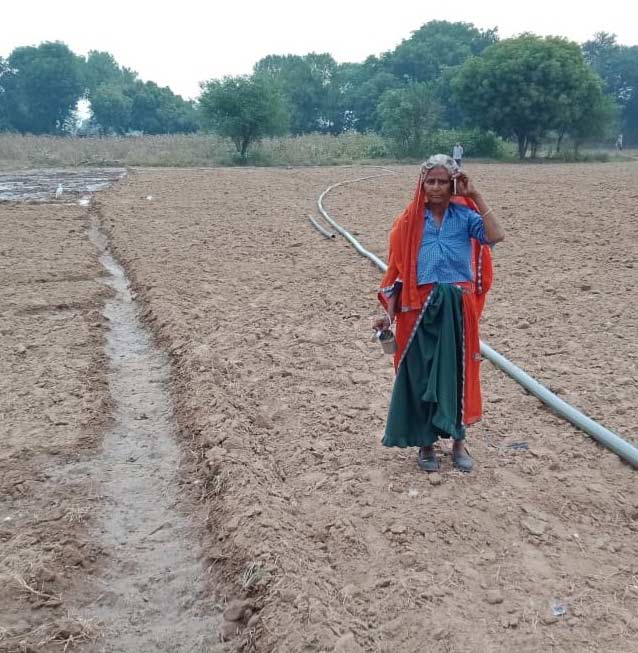 India’s population is increasing by leaps and bounds every year, and it shows no signs of slowing down. This population explosion in the country has put tremendous pressure on the existing lands and agriculture, which was already over-burdened, supporting the existing population of 1.4 billion. With the number predicted to cross 1.7 billion by 2050, how will India feed them all? The history of the Indian civilization is the history of the Monsoon. The sub-continent gets 75% of its annual rainfall in just four months of Southwest Monsoon, from June to September. Monsoon follows its own patterns, unpredictable as it may be. Certain periods comprising a decade or two have higher frequencies of droughts.

At the moment, we seem to be stuck in such a cycle. Between 1900 and the year 2000, there was one drought per decade. Since 2000, there have been five droughts. Earlier there was an average of one drought every 15 years. Comparatively, we have had two droughts in the last nine years alone. Of course, despite the most dazzling technological advances, agriculture in India is still largely monsoon dependent. Long dry spells are followed by periods of excessive rainfall leading to floods and curiously enough, you can have a drought and a flood in the same season in the same region. Long ago, these extreme disparities may have been solely blamed on nature’s vagaries, but now it has been established that human induced climate change is playing a major role. According to the Global Climate Risk Index released by Germany-based think tank, Germanwatch, India is one of the countries with the highest risk index indicating its vulnerability to extreme weather events. However, our country is hardly well equipped to deal with the repercussions.

United States Agency for International Development (USAID), an independent agency of the United States federal government works towards combating global hunger, poverty and malnutrition, through various collaborations across the world. In India, USAID has come up with a unique partnership with Skymet Weather Services called “Partnership in Climate Services for Resilient Agriculture in India (PCSRA)” to help digitalize climate services for the Indian farmer and develop new risk mitigation products. The project uses a combination of Indo-American technologies to make climate services available on the mobiles of registered farmers.

The 5-year project (October 2015-July 2020) has benefited more than 84,000 farmers spread across 31 districts in 9 states: Andhra Pradesh & Telangana, Bihar, Gujarat, Haryana, Madhya Pradesh, Odisha, Punjab and Rajasthan. Of the 31 districts, 5 are in the ‘Aspirational Districts’ of India, namely-Khammam in Telangana, Dhaulpur in Rajasthan and Aurangabad, Gaya, and Muzaffarpur in Bihar.

Of the enrolled farmers, nearly 58% are small and marginal farmers and approximately 9% are women farmers. 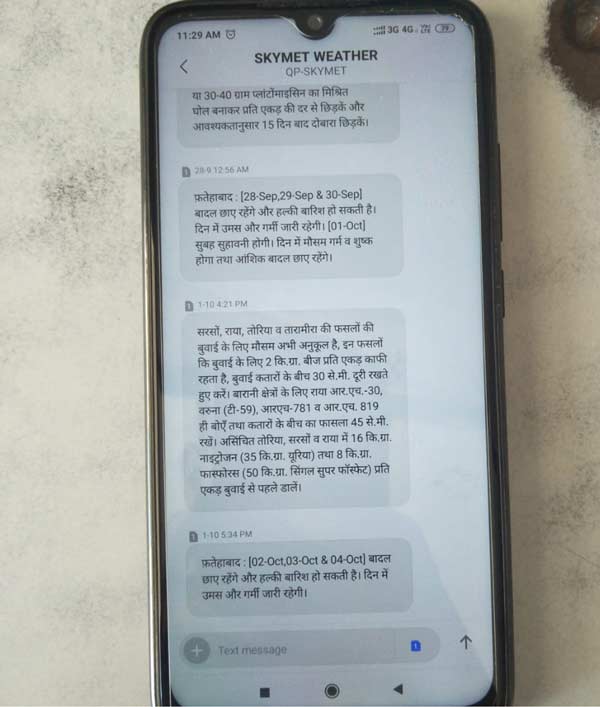 Availability of accurate and actionable weather forecasts at a granular level is an important tool for any farmer. It allows the Indian farmer to make time-sensitive decisions regarding the varieties of crops, irrigation, pesticides, fertilizers and the like. Skymet forecasts weather from Short Range (7-day ahead) to Long Range (3 Months in advance), and records live data generated through Automatic Weather Station (AWS) which helps its agricultural experts in devising location specific agro-advisory.

To generate the weather information, satellite data is analyzed and processed by meteorologists in Skymet by using a combination of National Oceanic and Atmospheric Administration (NOAA) datasets and publicly available information provided by the Indian Meteorological Department (IMD) to develop algorithms for site specific weather forecasts. Data from these satellites is crucial for numerical weather prediction (NWP) to harness the power of computers to run algorithms that process massive amounts of satellite data.

Once this information is generated, the AWS data is ingested into dynamical model input which has global data, then model is run to get better forecast instead of using simple global data. All 675 Automatic Weather Stations installed under this project are a combination of Indian and U.S. technology, with sensors imported from a California-based company called Davis Instruments and other components assembled in India. Last year, Skymet collaborated with another American institution, University Corporation for Atmospheric Research (UCAR) to strengthen weather forecasts be it short range, medium range, long range or inclement weather alerts, heatwaves and hailstorms. 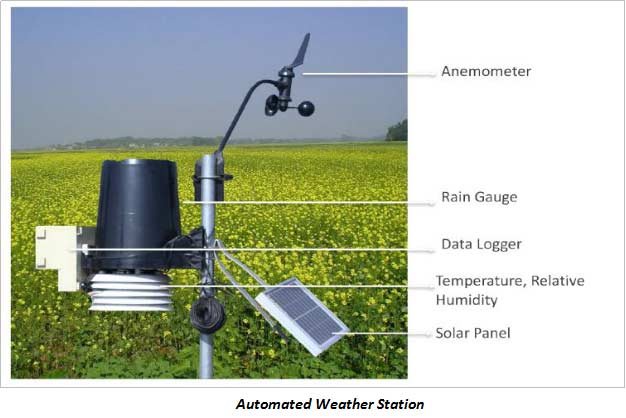 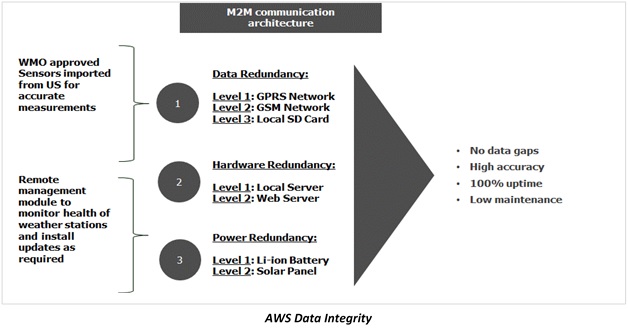 The automated data generated by the AWS is highly reliable and can be used to extrapolate weather parameters in near term. An AWS typically consists of a weather-proof enclosure containing the data logger, rechargeable battery, telemetry (optional) and the meteorological sensors. 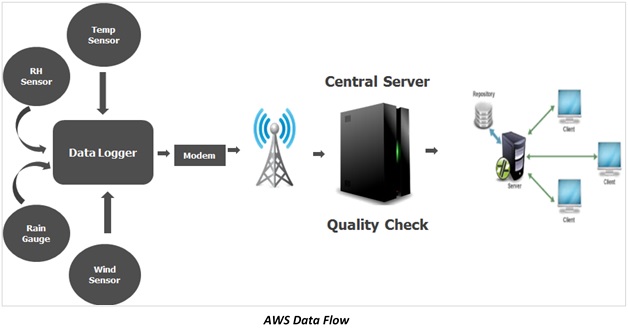 The AWSs installed under the project have been equipped with cameras and crop sensors to obtain more information about the real time ground situation. This helps crop experts in monitoring a large area efficiently as well as gear them up in advance to combat the crop damages by any of the factors including weather, pests and disease. The crop sensor has a Dielectric Leaf Wetness Sensor, Solar Radiation Sensor and Soil Moisture Sensor.

As the weather patterns are changing rapidly, it is imperative that farming patterns and practices be adjusted accordingly.

The agro-advisory disseminated under PCSRA is location-specific, and not arbitrary. It is derived through a three-step process- (i) the weather forecasts generated in-house by expert meteorologists (ii) field workers who double as local crop experts and send detailed reports of the area, and (iii) crop sensors and crop cameras attached to the Automatic Weather Station (AWS). 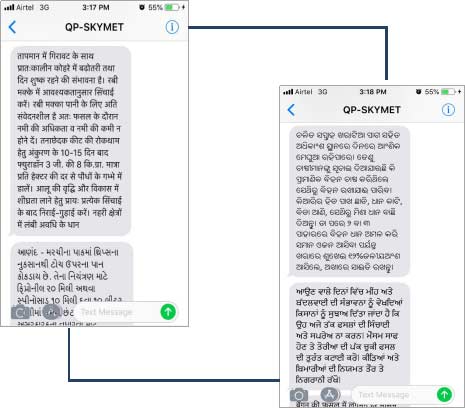 First, the crop experts analyze the crop situation by personally visiting the fields, and after taking into consideration the weather forecast for the region, they draft the crop advisory based on all these observations. These crop experts consult universities and research organizations regarding the best varieties of crops, pesticides, fertilizers, harvesting and post-harvesting techniques, which they incorporate in the crop advisories. These advisories are then circulated in 6 regional languages, twice a week, on Tuesdays and Fridays.

Besides giving real time crop advisories, the crop experts also aid the farmer in making sustainable choices. From suggesting less water intensive crops to recommending effective methods of crop-waste management instead of stubble burning, to the correct dosage of fertilizers and pesticides. PCSRA takes a holistic approach to improve crop productivity and sustainability. 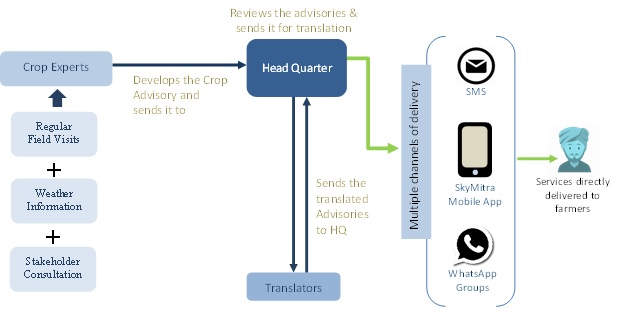 Information is sent to farmers in several ‘usable’ formats. Skymet has developed “SkyMitra” to deliver climate services for farmers with smartphones. For farmers with a feature phone, weather forecasts, weather alerts and agro-advisories are sent as SMS in 6 regional languages, twice in a week. Weather Display Boards placed in high visibility locations in villages makes climate information accessible to farmers who do not have mobile phones.

The most accurate and the most detailed of weather forecasts and agro-advisories do not count if does not reach the farmer in the remotest locations, with little to no literacy skills. Through Voice Broadcast Services (VBS), weather information is disseminated to the registered farmers in the form of voice messages. Farmers can also call on a toll-free number by dialing the pin code of their district to hear district-specific weather information.

The demand for climate services is increasing. In the past one year, the project has validated the commercial viability of climate services by selling it as a 'pay for use model' to three institutions in India: Aga Khan Foundation (through their implementing partners named Nav Jagriti, Samagra Shikshan and Sansthan, Aga Khan Rural Support System and Kausalya Foundation) in Bihar for 3500 farmers; SK Cold Storage in Gujrat for approximately 30 contract farmers; and ACT Bhuj in Madhya Pradesh for 400 farmers. Furthermore, the USAID Skymet project was awarded the “Best Agriculture and Farming Initiative” at the 5th Annual Business world Digital India Summit & Awards in June 2019 for its engagement with farmers in India.

Climate change has thrown into disarray an already unpredictable Indian Monsoon. Indian agriculture is saddled with the increasing demand of an ever-rising population and the need to make sustainable choices for the preservation of our limited natural resources. Luckily, the answer to both these problems lies in one solution- precision agriculture, which advocates the mantra of “produce more with less”. The average Indian farmer is vulnerable to the twin threats of climate variability and information gap. PCSRA, with its grassroots approach to technology has attempted to rectify both these problems. As to the success of this novel approach, the numbers speak for themselves. Since its inception in October’15, a total of 84140 farmers have registered themselves under the project to become more resilient in the face of climate change.