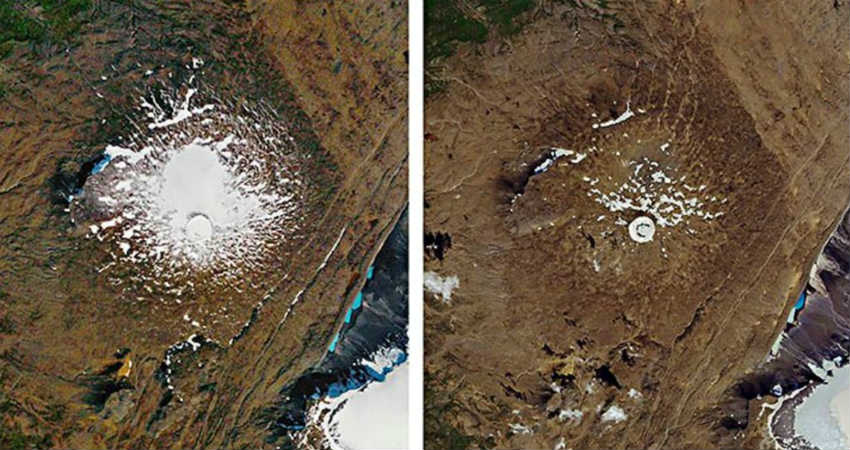 Scientists see the shrinking of glaciers as one of many warning signs that the earth's climate is stumbling toward dangerous tipping points.

Ok (Okjokull) is the first Icelandic glacier to lose its status as a glacier.

As the world recently marked the warmest July ever on record, a bronze plaque was mounted on a bare rock in a ceremony on the barren terrain once covered by the Okjokull glacier in western Iceland.

Around 100 people walked up to the mountain for the ceremony, including Iceland’s prime minister, Katrin Jakobsdottir, former UN human rights commissioner, Mary Robinson, and local researchers and colleagues from the United States from who pioneered the commemoration project.

An inscription on the plaque written by Icelandic author Andri Snaer Magnason addresses the future generation and says that in the next 200 years all other glaciers are expected to follow the same path.

Climate change is something that happens very slowly on a human scale, but very quickly on a geological scale.

According to satellite images from the NASA Earth Observatory, the glacier appeared as a solid-white patch in 1986, but in an image from August 1 this year, only small dashes of white ice remained.

Iceland is known as the Land of Fire and Ice for its landscape of volcanoes and glaciers which is immortalized in literature. However, the rising global temperatures have led to the melting of glaciers.

Iceland loses about 11bn tonnes of ice per year, and scientists fear all of the island’s 400-plus glaciers will be gone by 2200. Glaciers cover about 11% of the country’s surface.