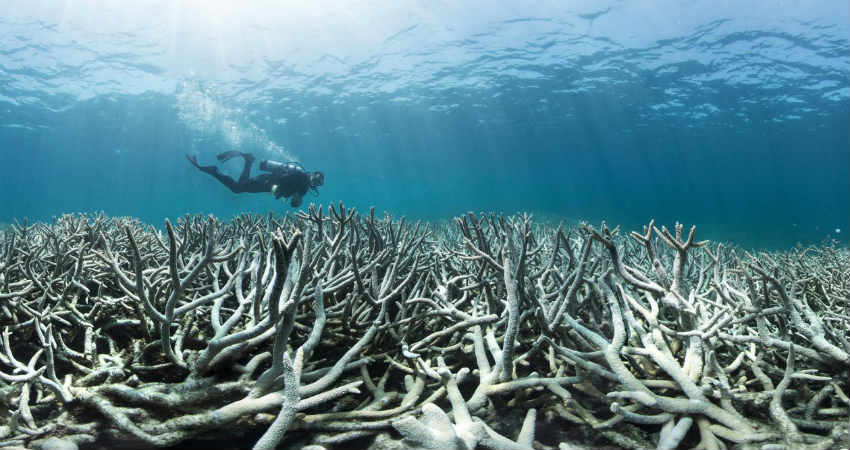 The Great Barrier Reef's long haul outlook has been dropped from "poor" to "extremely poor" in a new report that is pressing for some strict action against Climate Change and the other dangers that are affecting the Reef.

Rising ocean temperatures and marine heat waves are doing the most harm to the reef's wellbeing, as indicated by the report composed by the Great Barrier Reef Marine Park Authority.

Josh Thomas, the CEO, considered this a "critical" point in the reef's history, saying its future relies upon action taken at this point.

On the off chance that nothing is done to stop the present pace of Global Warming, the reef will be unsalvageably harmed for the coming generations. The finding originates from an investigation of information from scientific organizations, research institutes, industry and government offices – and is the summary of two years of expert workshops.

The report has come up after back to back bleaching which have caused immense damage to the coral reefs. Cyclones and outbreaks of crown-of-thorns starfish – which eat coral – have harmed the reefs as well. Such dangers are escalating, as well as widespread habitat loss and deterioration are adversely affecting fish, turtles and seabirds.

Just around 60 percent of the 31 ecosystem health markers surveyed in the report were classed as good to very good, and the rest were in poor or very poor condition.

Along with Climate change, the reef is additionally suffering because of coastal development, direct human use, for example, illicit fishing, and land-based run-off from farming.

While water quality is improving in certain regions, the report's creators said progress was too gradual. The Queensland state government is thinking about controversial regulations to restrict nutrient and sediment run-off from farms – in the midst of reports that just one out of ten sugarcane farmers appropriately manage pollution into reef catchment zones.

"In 2009, the Reef was viewed as at an intersection between a positive, well-overseen future and a less certain one. In 2014, it was viewed as a symbol under strain, with proceeded with endeavors expected to address key dangers," it said. Presently, Australia is thinking about a changed and less resilient reef, as indicated by the report.

"It is significant not to lose hopefulness by assuming the job is too big, or to imagine that a changed reef is far off in the future – actions made currently will matter.