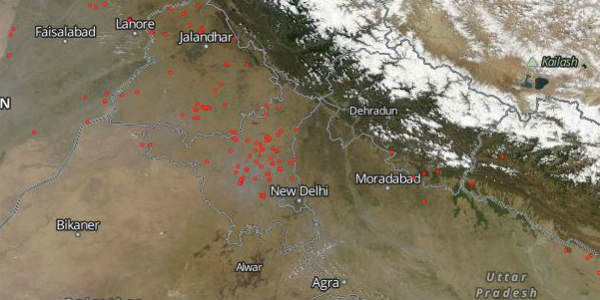 Despite a complete ban on stubble burning by the National Green Tribunal (NGT), an enormous increase in the crop fires across Punjab, Haryana and Delhi-NCR has been revealed by NASA. This crop residue burning is mainly prevalent in Haryana.

NASA’s Fire Mapper has exposed few images that show a massive upsurge in the number of fires that out broke between April 25 and May 3. In general, the months from March to May are attributed to wheat burning, so as to make the field ready for the sowing of next crop before the Monsoon.

In fact, last year after paddy was harvested in the month of October, the residue was burnt to make the field favorable for wheat sowing. Thus, during the time of Diwali, Delhi-NCR was enveloped with a thick layer of smog that had affected lives of many.

Moreover, on Wednesday, NGT has also displayed photographs of crop burning in Haryana. In lieu of this, NGT has also demanded for a status report from the state government regarding the same.

A few days back, the tracts of ripe wheat ready for harvesting was set on fire in Haryana’s Karnal district. This was done after the standing crop was reaped and the field was to be made ready for paddy plantation in the Monsoon. However, the farmers claimed this to be accidental and not intentional.

Crop residue burning on May 1:

Crop residue burning on May 2

Not only is the crop residue burning dangerous for the environment, but the wheat and paddy stubble burning also destroys the soil and causes severe heat stress on cropland. Though the crop burning is a traditional method for making the field progressive for another crop, but farmers claim that other agri-equipment or rotavor that can sow the seeds without removing the crop remains is expensive.

Click here to see the pollution levels in Delhi and NCR

Moreover, the technology is still not known to many farmers. And those who can plow the stubble into the soil claim it to be a time-consuming and laborious task.

NASA images also display crop burning in Madhya Pradesh and at a few regions of East India as well.

Here are two tables that display the active fire count and active fire locations across India: 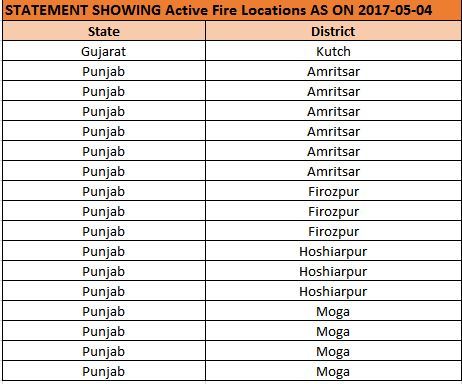