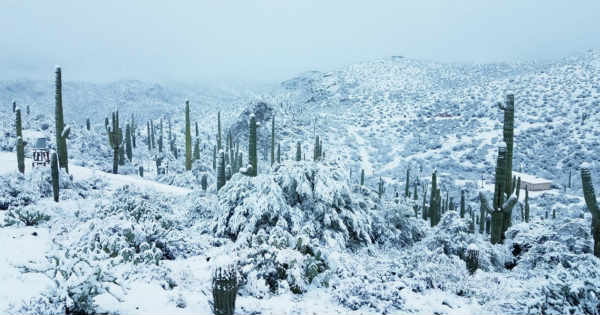 Flagstaff in Arizona was found under the heap of snow from late Wednesday, February 20 up till Friday, February 22. The mountain city witnessed almost half of their yearly snowfall in a matter of few days. On Friday, the city’s Airport measured 40.3 inches of snow against the average of 102 inches. However, in last winter season, Flagstaff recorded only 42 inches of snow.

February 21 witnessed all time daily record for snowfall in Flagstaff with 35.9 inches of snow breaking the previous record of 31 inches on December 30, 1915. Not only this, it has also surpassed February’s all-time daily snowfall record of 25 inches that was set on February 2, 1901.

The snow storm began on Wednesday when it spread turbulent snow over the North Sierra Nevada, inclusive of Donner Summit, California, before shifting its path to interior southwestern United States.

This storm brought blizzard conditions and the travel was shut down over the mountains of Arizona, New Mexico and southwest Colorado. As per the records, the biggest storm in Flagstaff brought 64 inches of snow which ended on January 17, 1985.

The actual temperatures are expected to dip into the single digits and even below zero over the mountains on Saturday morning and later part of Saturday night. The storm is further expected to evolve into a severe snowstorm with strong winds from the Central Plains to the Upper Midwest this weekend.

It is predicted that lower Mississippi Valley would be affected with tornadoes and would create high winds and power blackout from the southern Plains to the Great Lakes and Northeast. The storm is likely to bring all or mostly rain to Chicago, Detroit, Indianapolis, Cincinnati, Cleveland, St. Louis and Kansas City, Missouri.