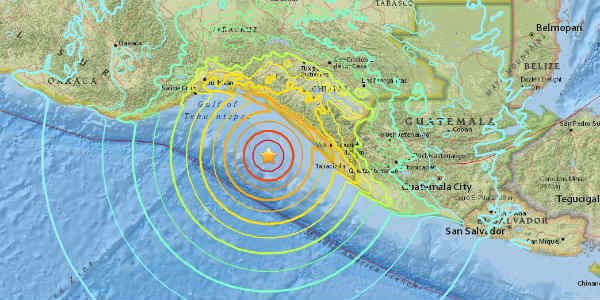 Updated on 11:32 AM: There are reports of people being stuck in a hotel in Oaxaca

Updated on 11:31 AM: A big aftershock of 5.7 magnitude has hit Coastal Oaxaca in Mexico.

Updated on 11:30 AM: As per the Civil protection agency, it has been reported to be the s said it was the strongest earthquake to hit Mexico since 1985 which had killed at thousands.

A massive earthquake has rattled the southern region of Mexico, shaking buildings and leading to residents fleeing from their homes. As per the USGS, the magnitude of the earthquake on Richter scale is 8.0. The earthquake struck about 96km Southwest of Pijijiapan, Mexico while the depth of earthquake has been reported to be 35 km.

Along with this, as per the US National Weather Service, a Tsunami warning has also been issued off the coast of Chiapas in Mexico.

As per reports, massive tsunami waves are expected in areas of Mexico, El Salvador, Guatemala, Costa Rica, Panama, Honduras, Nicaragua and Ecuador. The threat evaluation for areas including Hawaii, Guam and other Pacific islands is still under process.

There have also been reports of chaos in Mexico City with many residents fleeing from their homes. Mexico City is without power after the quake hit the city. Along with this, residents of Coastal Oaxaca and Chiapas where Tsunami warning has been issued are told to prepare for an evacuation in view of a Tsunami.

As per reports, many areas of Guatemala have also been affected due to the earthquake. Quetzaltenango, a city in Guatemala is witnessing power outage. Damage is being assessed by firefighters in the region.