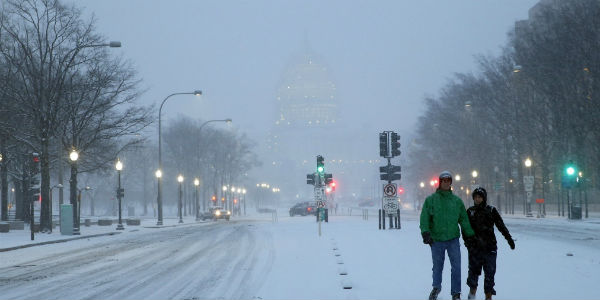 October end is expected to bring in chilly weather for the residents of United States. The chilly air will open doors for snow sleet and snow gathering in parts of the central and northeastern US. The cooler air is expected to reach the Atlantic Coast, mainly the central states of the country are likely to get affected the most.

Due to the rushes of cold air, many parts of the Plains and Midwest is anticipated to witness the least temperatures of the season so far amid the following five to seven days. Bone-chilling gusty winds can be braced by the Central States.

Some cold mornings are conceivable in the Ohio and Tennessee valleys, where winds can decrease. The example will include some days with highs in the 40s, or 10 to 15 degrees beneath normal, around Chicago.

In the meantime, seasonal temperatures are expected for a significant part of the coastal Northeast. Some ice is likely in the typically cool spots of the mid-Atlantic and New England states amid the mid and latter half of the week.

Starting from Wednesday, the maximums in the 70s will be bartered with highs in the 60s most days from Boston to New York City, Philadelphia, and Washington, D.C. Enough snow to paint the streets white can be anticipated by Tuesday night.

However, as the storm will wrap up and taps the nippy air, wet snow may blend with rain showers from parts of Minnesota to Wisconsin and northern Michigan into early Wednesday. Another snowy storm along with chilly air is anticipated to give a few snowflakes in parts of central Appalachians on Wednesday.

The later week will also bring down the temperatures in the lower to mid-20s with a freeze. The second cold push will make a time of snow spread southward along the Rockies and the adjoining High Plains on Wednesday and Thursday.

As per the Met Department, few crawls of snow spread is expected in parts of eastern North Dakota, northern Minnesota, northernmost Wisconsin and a segment of the Upper Peninsula of Michigan late Wednesday night to early Friday.

Should these two climate highlights meet up in an opportune way, a measurement of snow gathering in parts of the central and northern Appalachians ahead of schedule one week from now, only before Halloween.

So, following a long time of irregular warmth, it appears that winter-like conditions will crawl up on the North Central states and maybe parts of the Appalachians amid the latter October.