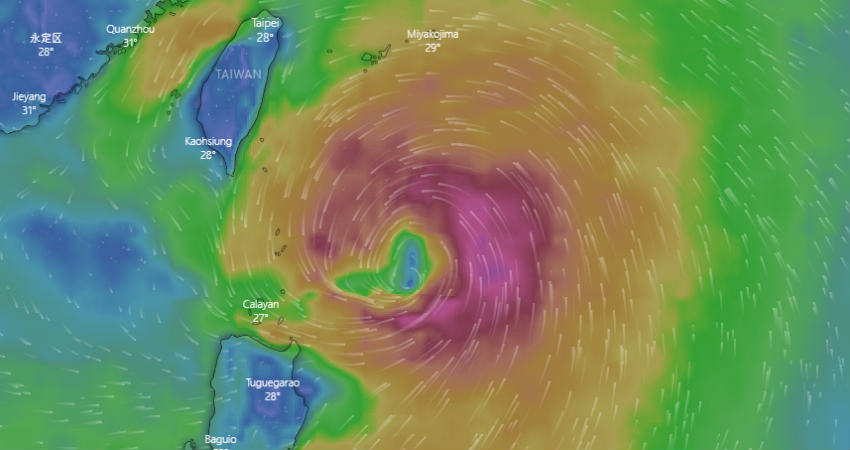 With a most extreme breeze power of 90kph, Bailu, the eleventh tropical storm this year, made landfall in Dongshan County at 7.25am yesterday. Fujian region said on Saturday that 9,926 vessels of fishing were called back to harbor as it prepared itself for the coming Typhoon Bailu.

The region's flood control and drought relief centre said that over 14 thousand people had been evacuated successfully from aquatic farms.

149 spots near the sea side had been closed along with 1,318 building out of security concerns. The storm likewise put ferry services in Xiamen and Kinmen in Taiwan, and Pingtan and Taiwan's Taichung on halt. about 124 flights have been cancelled at Xiamen air terminal.

Updated on August 25 at 09:16: After giving heavy rains in Taiwan, Typhoon Bailu head towards China

Heavy rains in Taiwan due to Typhoon Bailu stranded 18 individuals on Saturday. 14 of them are from the Hualien region alone. So far, 450 people have been evacuated. Nearly, 12,000 families were without power until Saturday evening.

After giving heavy rains in Taiwan, Typhoon Bailu, also known as “Ineng” was on its way to the Fujian region in southeastern China on Sunday morning.

The warm waters of the Pacific Ocean and the South China Sea provide strength to different Typhoon and Tropical storms that hit Taiwan, China, Japan, the Philippines, and Vietnam from June to November every year.

Typhoon Bailu has already started affecting Taiwan with heavy rains and strong winds. The storm will very soon make landfall over Taiwan in view of which several flights have been cancelled with many parts of the nation keeping schools and colleges closed, waiting for the storm to pass through.

China's national observatory issued a yellow for Typhoon Bailu as it's all set to bring squally winds with heavy rains to south China.

The tropical storm, the eleventh this year, will southeast of Taiwan today and move northwestward to make another landfall in the beach front zones of Fujian and Guangdong regions during the evening Saturday or around Sunday morning, the National Meteorological Center said in an announcement.

Heavy rains along with strong winds and flash floods are likely in Taiwan and the regions of Fujian, Zhejiang, Guangdong, Shanxi, Sichuan and Yunnan, with precipitation up to 60 mm for every hour in some parts.

People have been asked to not venture out in the sea and suspend water activities and take precautions against flash floods brought about by the storms.

China has a four-level shading coded weather warning framework for tropical storms with red being the most extreme, trailed by orange, yellow, and blue.

Updated on August 23 at 13:11: Typhoon Bailu continues to gain strength in the Western Pacific Ocean as the storm is all set to make landfall over Taiwan during the morning hours of Saturday. Known as Ineng in the Philippines, the eye of the storm will cross the island during the afternoon hours on Saturday.

Warnings have already been issued in Southeast parts of Taiwan as well as northwestern regions of Philippines for off shore activities today itself as seas are likely to become very rough. The storm is following a northwest path moving at a speed of 24 kmph and has already given heavy rainfall to parts of Philippines along with strong winds.

As per the Central Weather Bureau (CWB), Bailu at 8:00 am (local time) was situated about 910 km SE of Taipei, the capital of Taiwan centred at 126.2 degrees E Long, and 18.1 degrees N Lat. There are 70 percent chances of Bailu making landfall over Taitung country tomorrow morning as per its current path.

There is a possibility that the storm may change tracks and vary in intensity, however, most parts of Taiwan will continue to see heavy rainfall accompanied with ferocious winds. A Typhoon alert is likely to be issued by the CWB today afternoon. Green Island, Orchid Island, and the Hengchun Peninsula have already been warned to suspend any offshore activities in view of the upcoming storm.

After Taiwan, the storm may lose some strength, thereafter moving towards China, giving heavy rainfall over that region as well. Guangdong, South Zhejiang and Jiangxi may see some heavy rains with strong winds during this period.

Meanwhile, next week, after weakening, several days of heavy rains are expected in Japan next week due some of Bailu’s moisture being pulled to the northeast side.