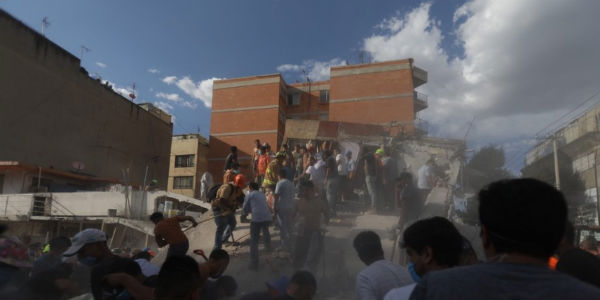 In the same month at the 32nd anniversary of 1985 earthquake that killed almost 10,000 individuals in Mexico, another intense 7.1 magnitude seismic tremor struck Central Mexico, wreaking havoc among the residents.

As a result, a few structures have been crumpled and around 150 individuals have revealed dead, including no less than 21 from collapsed school in Mexico City and in the province of Morelos that was near the epicenter of the tremor.

The tremor has shaken the ground with petrifying power, cutting dividers and sending inhabitants flooding into the boulevards for the second time in only two weeks. This shake happened less than two weeks after the most intense seismic tremor in Mexico of magnitude 8.1 shudder that killed no less than 90 individuals, demolished a huge number of homes and was felt by a huge number of individuals.

According to researchers, the epicenter of Tuesday's seismic tremor and the bigger one on September 7 were more than 400 miles separated, however they both happened in a locale where one of the world's crustal plates, the Cocos, is sliding underneath another, the North American.

The epicenter of the tremor was foreseen to be 76 miles southeast of the capital, close to the town of Raboso in Puebla. The tremor struck at 1:14 PM (ISD).

#MexicoEarthquake: With 77 already confirmed dead, our staff are on the ground assessing the damage. Get the facts: https://t.co/UJ6rpSblyc pic.twitter.com/YcPnPzETHP