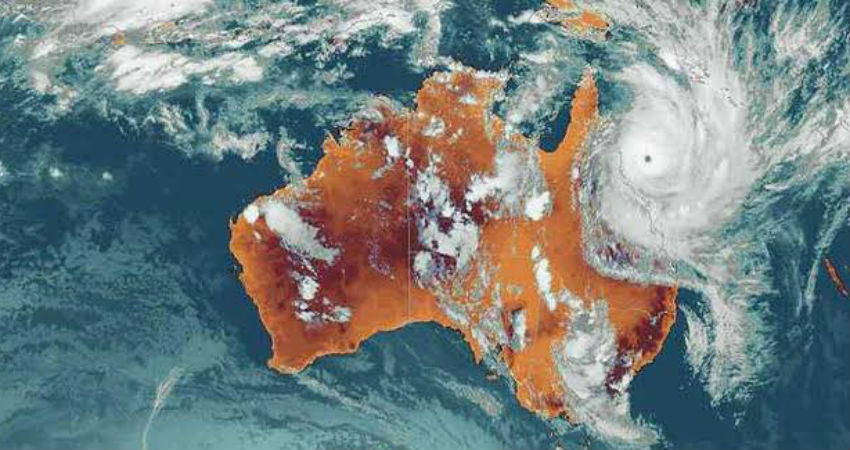 Most cyclones find origin from ITCZ. In fact, storms form in tandem with the movement of the ITCZ which has an annual shift from North to South. One exception here is that the ITCZ does not move over to the South Atlantic Ocean due to which no storms are formed here.

Talking specifically about Australia, the country continent has a large stretch running 3000 km north to south and 4000 km south to west and has an area of 8 million square km, which is twice the size of India. Australia is sea locked due to which all areas are susceptible to Cyclones.

Australia comprises of equatorial region, tropical region and the extra tropics. Moreover, the region has all kinds of terrain right from Plateau to deserts. The western half is more desert prone as compared to the eastern half which has plains.

The storm season for Australia ranges from December to April. Talking about the season 19-20, two Cyclones Blake and Claudia have already made an appearance. However, both these cyclones were not very strong and did not have a very big impact over the region.

The average number of storms in Australia in a season is between 9 and 13. Out of these few make a landfall, others just skirt the coast. However, there is at least one storm each season that does cross coast.

Also, Cyclone formation in Australia is not evenly spread. Thus, cyclone formation is not an absolute regular feature. At times there is a long silent phase and then there is a burst of Cyclones all at once. Not all weather systems become Cyclones, some are tropical lows. Even remnants of these lows at times end up becoming stronger systems later on.

Talking about forecast, the Cyclone Season forecast is related with sea conditions of previous the season. Therefore, ENSO and IOD indicators are taken into account to work out the upcoming statistics of the season.

Previously, neutral ENSO was seen, IOD was positive but even that has neutralized now. Thus, this season, fewer than average number of storms will be seen as neutral ENSO leads to high pressure areas in northern parts of Australia.