Polar vortex: US freezes with lowest temperatures it has seen in years 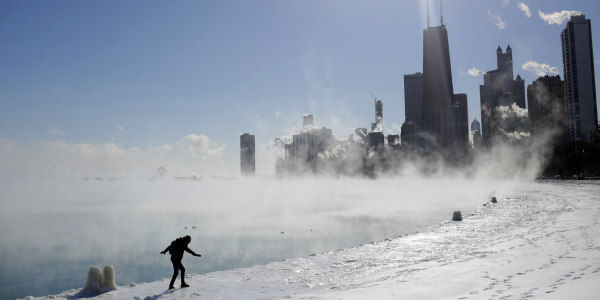 In the past week, the polar vortex that hit the US Midwest has so far resulted in the deaths of 21 people and leaving more than 200 million people facing freezing temperatures. The entire US Midwest region has also been gripped by the lowest temperatures it has seen in years. Temperatures in all 50 U.S. states dipped to freezing or below.

Polar vortex also known as an unusually cold Arctic air mass, is responsible for such severe temperatures, which in many areas have plunged well below -18˚C. It spins to life every winter 10 miles above the ground. Typically, it has a single center, surrounded by a wall of powerful winds. But sometimes it weakens, shifting, and even breaking into pieces.

The polar vortex split into parts. It's a pattern that is happening more frequently and is often followed by severe cold and winter storms. The split takes two weeks to affect the weather: It warps the polar jet stream, bringing freezing arctic air south and warm air north. The effects of the polar vortex could become more frequent and severe.

The polar vortex is responsible for a number of deaths, disruptions to services, and energy outages in the affected areas. U.S. Postal Service mail delivery was suspended at times and many schools and businesses closed their doors.

The severe weather across the country has led to thousands of flights being cancelled, as well as schools and universities being closed. States of emergency have been declared in some areas and the US Postal Service said it would suspend deliveries in certain locations.