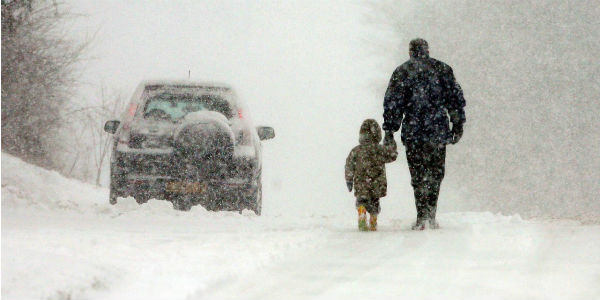 United Kingdom has been battling extreme cold weather conditions since last many days. In fact, the meteorological department had issued as many as 39 alerts during the last 24 hours.

Well this was not all and another low-pressure weather front from the Atlantic starting affecting the entire nation. This has further enhanced the rain and snow activity in Britain. According to Skymet Weather, hilly region would witness snowfall, as the rain from the weather system collides with cold air today.

Further, we do not expect any relief anytime soon as a fresh weather system would move into western parts of Britain by tonight and into the early hours of Thursday.

Thereafter, we will see outbreaks of showery rain across the country and as that bumps into slightly cold air across central areas, we will see some hill snow for parts of Wales and Northern England.

However, there will be clear spells and showers in western parts of Scotland, Northern Ireland and a few western districts of England and Wales. Temperatures will also be dropping by a degree or so below freezing point.

On Thursday, the weather system will then be pushed away by winds followed by a day of sunshine and showers. Meanwhile, before rain falls in the south, Wednesday will start off cold. Northern parts of the country will be covered by snow.

A chilly start to the day for many places, some sunshine around even for central and southern Scotland. Further showers will develop widely, rains will be confined to the northern isles with snow in some places.

Elsewhere it’s mostly just a sunny day with some short showers. The rain belt is moving west to east and there will be an increasingly brisk wind across southern areas from the west.

Over the weekend, a deep low-pressure system could hit the UK bringing in snow, torrential downpours and incredibly powerful gales.  From Friday to Saturday, a low-pressure system will be seen coming in from the south west causing wet and windy weather. This could also bring back some cold air back into Scotland.

Ahead of the weekend there could be some further problems with snow in Scotland, elsewhere it will be milder and slightly unsettled.