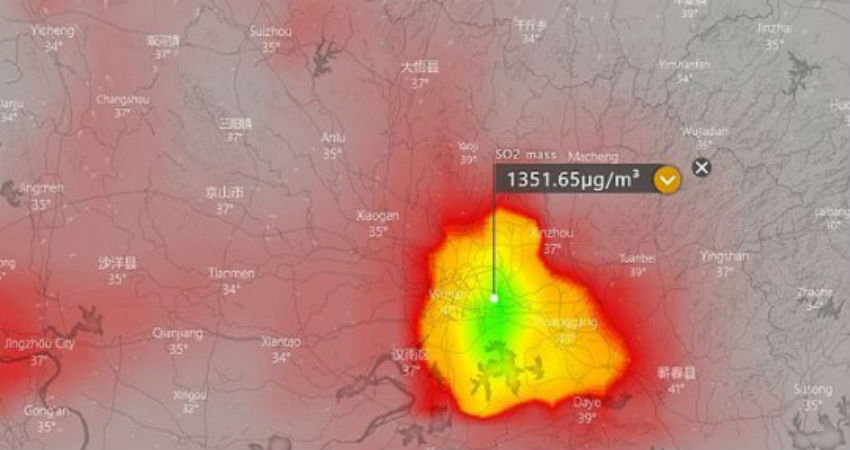 The coronavirus outbreak is way more deadly than it seems. In fact, the extent of the disease is evident by the cloud of Sulphur dioxide which is seen in the affected cities. These clouds are a proof of bodies being cremated in China.

There are several satellite images which have been doing rounds that show very high Sulphur dioxide levels over the city of Wuhan, which is the origination of the coronavirus. Chinese officials have ordered immediate cremation of bodies who died due to the outbreak and even the funeral services need to be a small affair.

As per scientists, the production of sulphur dioxide takes place when medical waste is incinerated or bodies are cremated. As per windy, no other city in China has been showing Sulphur dioxide as high as Wuhan which were around 1350 µg/m3 during the weekend. As per WHO, a 500 micrograms per cubic metre dosage should not exceed for over 10 minutes. In fact, a concentration of 533 533 µg/m3 for 15 minutes is considered to be high by the government of United Kingdom.

While it still remains unclear if there is a direct link between the high Sulphur dioxide levels as well as Coronavirus, high levels can cause several respiratory issues.

As per the health ministry of Japan, around 65 more cases were found in the cruise shop which has been quarantined in Yokohama. Thus, the total affected has increased to 135. Meanwhile, the death toll has now come in four digits.

Close to 500 cases have been confirmed outside of China which includes two deaths in Philippines and Hong Kong. Moreover, the death toll has increased from four to eight in Britain where coronavirus has been declared to be an imminent threat.