Tokyo, parts of Japan gear up for catastrophic Typhoon Hagibis 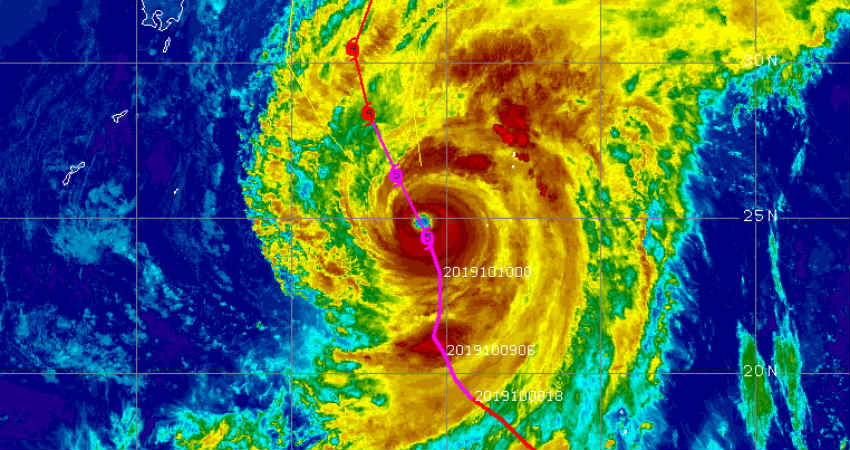 Typhoon Hagibis, a Cat 5 Typhoon is moving towards Tokyo, intensifying rapidly. Hagibis, is a Super Typhoon, the highest category of a storm packing winds up to 241 kmph, also being the first super Typhoon of the season.

This is the strongest storm in the oceans across the globe currently, located about 950 miles south of Tokyo, 725 miles of Yokosuka and is moving northward at a speed of 15 kmph. Hagibis is on the course of re-curvature and will follow a northeast direction. It will also pick up speed up during that time.

Hagibis has been the quickest system to become a Super Typhoon and has intensified into cat 5 in 24 hours from Cat 2. Now, it may take an aim over Tokyo by the weekend, which lies on the extreme eastern coast. The actual target of Hagibis is not known yet and it is a possibility that it may just whisker, but it will move in proximity of Tokyo.

Hagibis is expected to hit around the weekend, and may lead to evacuations as strong winds, and heavy rains will be seen. Moreover, the Rugby World Cup games, which are going on in Japan have been cancelled for Saturday which includes the games between England and France and Italy and New Zealand. This is the first time that games have been canceled at the tournament.

Storm surge, which is around 60 feet right now, will reduce as Hagibis is expected to recurve and weaken into a Cat 3 Typhoon. However, it will cause damage, and has the potential to pose threat.

Japan Rail has already made an announcement to suspend services on multiple lines while Japan Airlines and All Nippon Airways are expected to suspend flights between Friday and Sunday.