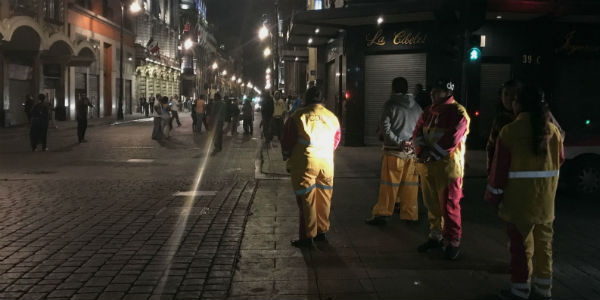 Mexico was rattled by a massive earthquake early Friday morning at around 5 AM (UTC) that shook the residents. As per the USGS, an 8.0 magnitude earthquake trembled Mexico, striking around 96 km Southwest of Pijijiapan with a depth of 35 km.

The US National Weather Service also rang Tsunami alarms off the Chiapas Coast in Mexico. The situation across Mexico City has become chaotic with many residents fleeing from their homes to safer areas after the tremor hit the city.

Lets's see how Twitterati reacted to this natural disaster in Mexico:

We just had a powerful #earthquake in #MexicoCity.
Huge.
People are frightened and lots of power outages.
Hope those near epicenter are OK pic.twitter.com/Gh3XTeEOOX

A Magnitude 8.0 #earthquake just struck off the coast of Mexico. At this point I'm just praying for every living thing on this planet. pic.twitter.com/skBv761y8P — E5QUIRE (@Dj_E5QUIRE) September 8, 2017

An 8.1 #earthquake just hit Mexico. Mother Nature is not having it right now with us. Prayers to those affected, prayers to the world.

Earthquake in Mexico, the earths wheels are in a high speed wobble from disgusting displays of humanity living on its surface. @nytclimate — Mike Stouffer (@TheSixthLens) September 8, 2017

8.1 rector magnitude of earthquake just hit Mexico! This is insane!