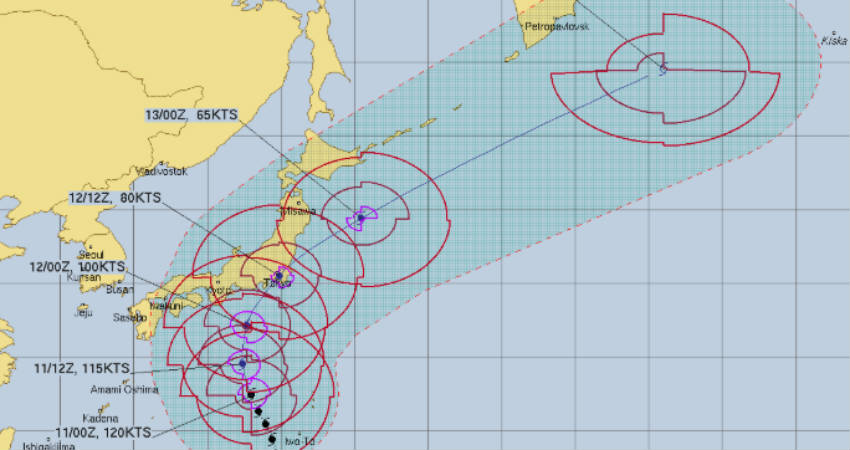 Japan has been bracing for the appearance of Typhoon Hagibis, which is all set to downpour Tokyo with the heaviest showers in 60 years, only a month after Typhoon Haxai lashed the region around the capital, causing transport chaos and causing enormous power cuts.

There is an expanding plausibility that Hagabis will make landfall in Tokai or the Kanto district tomorrow. Hagibis is all set to bring "fierce" winds, high waves and record precipitation to areas right from the upper east to western Japan.

Hagibis is similar to the 1958 tropical storm that hit eastern and central parts of Japan, killing at least 1,200 individuals.

Hagibis will bring in landslides, flooding, swollen rivers as well as flash floods, and residents have been asked to evacuate early for their own safety. Two rugby World Cup matches planned for Saturday have been dropped because of Hagibis.

The tropical storm additionally resulted in the changes to the Formula 1 Japanese Grand Prix which is planned during the end of the week at Suzuka.

Qualifying has been moved from Saturday to Sunday, F1 authorities stated, as all matches on Saturday at the Suzuka Circuit were dropped.

Carriers have effectively dropped around 1,280 flights on Saturday. ANA halted every single local trip to and from Tokyo's two primary air terminals, Haneda and Narita, from Friday evening.

ANA and opponent Japan Airlines Co additionally dropped a few flights to and from air terminals of Osaka and Nagoya.

As of local time 9 AM, Hagibis was about 410km west of Chichi Jima Island, moving north-northwest at 25 kmph with winds from 180kmph, gusting up to 252 kmph. A month back, Typhoon Faxai had rattled eastern Japan, including Tokyo, killing one person, while around 130 others were harmed.

In Chiba prefecture, a huge number of families lost power and water supply for about fourteen days. Hagibis is following a similar track and is likely to cause damage in similar parts. Moreover, authorities in the Chiba, only east of Tokyo, have advised individuals to get ready supplies of food and water for as long as three days.