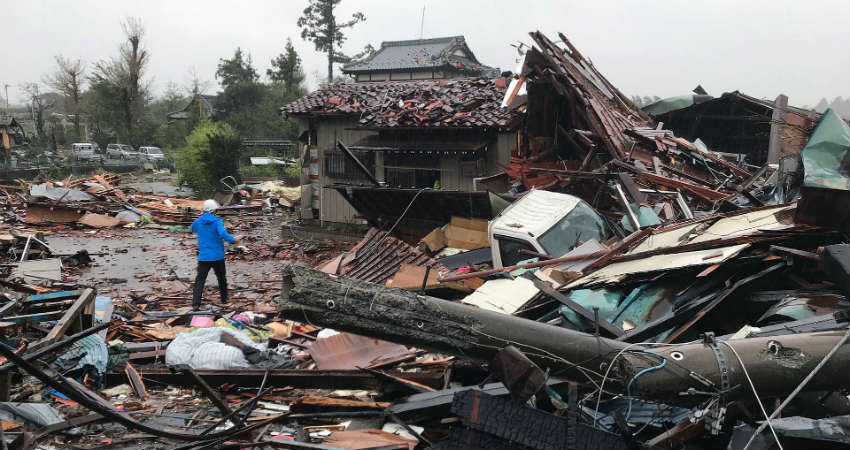 Updated on October 13, 06:30 PM: More than 100,000 rescuers, including 31,000 troops, were working into the night to reach people trapped after torrential rain caused landslides and filled rivers until they burst their banks.

Updated on October 13, 06:00 PM: The government put the death toll at 14, with 11 people missing, but local media said at least 26 people had been killed, and at least 15 were still unaccounted for.

Self-Defense Forces members scrambled Sunday to rescue people trapped by flooding after powerful Typhoon Hagibis ripped across the country, killing at least 19 people and leaving more than a dozen missing.

Rescue operations were underway in central, eastern and northeastern regions of Japan that were hit by floods and landslides as an effect of Typhoon Hagibis. The Defense Ministry has mobilized some 27,000 Self-Defense Force personnel for rescue and relief operations across the country.

Around 100 people were injured across the country, according to a Kyodo News tally based on information provided by rescuers and other authorities.

Updated on October 13, 12:20 PM: The death toll following Typhoon Hagibis has risen to 19 with 16 people missing.

Shinkansen bullet trains are submerged at their base in Akanuma, railroad bridge over the Ueda destroyed, houses submerged in #Nagano Prefecture, central #Japan, after the #Chikuma river overflowed due to #TyphoonHagibis. #TyphoonHagibisJapan #Hagibis #HagibisTyphoon pic.twitter.com/SSdQkLSaM2

Updated on October 13, 11:15 AM: Typhoon Hagibis made landfall Saturday night local time, as the country braces for hurricane-force winds that have killed at least 10 people and injured more than 140.

Updated on October 13, 10:15 AM: Japan's military scrambled Sunday to rescue people trapped by flooding after powerful Typhoon Hagibis ripped across the country, killing at least 11 people and leaving more than a dozen missing.

Updated on October 13, 10:05 AM: The destruction forced Rugby World Cup organisers to cancel the third match of the tournament though the key Japan-Scotland clash will go ahead.

Updated on October 13, 09:50 AM: By Sunday morning, the significantly weakened storm had moved back off land, but serious flooding was reported in central Japan's Nagano, where a burst levee sent water from the Chikuma river gushing into residential neighbourhoods, flooding homes up to the second floor.

Updated on October 13, 09:45 AM: "Overnight, we issued evacuation orders to 427 households, 1,417 individuals," Yasuhiro Yamaguchi, an emergency official in Nagano city.

Updated on October 13, 9:30 AM: The Tokyo metropolitan government opened an evacuation centre in Tokyo’s Ueno district for foreign tourists stranded by the shutdown.

Updated on October 13, 8:45 AM: About 17,000 military personnel were placed on standby for rescue operations.

Updated on October 13, 8:20 AM: The heavy rain caused a river in Nagano prefecture, north-west of Tokyo, to flood its banks. Some houses along the Chikuma river were nearly fully submerged in water and at least one person was rescued from the roof of a house by helicopter. Part of a road was swept away in flooding.

Updated on October 13, 8:17 AM: Storm surges and high waves raised sea levels by more than a metre along some stretches of the coast, and waters in Tokyo Bay were up by 50cm, increasing the danger of severe flooding in the city centre.

Updated on October 13, 8:15 AM: Evacuation orders had been issued to more than 800,000 households in Tokyo on Saturday as Hagibis threatened power cuts and widespread flooding.

Updated on October 13, 8:00 AM: At least five people died and more than 90 people were injured after a massive Typhoon lashed Japan. Rescue operations were underway in central, eastern and northeastern regions that were hit by floods and landslides. As many as six million people across Japan's main island of Honshu were advised to evacuate.

Updated on October 13, 2:15 AM: Officials are urging people to be on the alert for more flooding, landslides, and gusts of wind.

Updated on October 13, 2:10 AM: Evacuation orders are in place for nearly 5 million people. The orders are at Level 4 on the 5-tier warning scale, which means people should quickly move to safer places.

Updated on October 13, 2:05 AM: Widespread flooding has been recorded in central and eastern Japan after Typhoon Hagibis ripped through the main island of Honshu. Hagibis has since been downgraded to a severe tropical storm.

Updated on October 13, 2:00 AM: A city official from Tomioka in Gunma Prefecture says two houses collapsed in a landslide. One man was rescued but later died. Rescue efforts are underway to find two other people who remain missing.

Updated on October 13, 1:55 AM: In Nagano Prefecture, three cars were washed away by flood waters near the Chikuma River. Three people have been rescued but three others remain missing.

Updated on October 13, 1:50 AM: Typhoon Hagibis has caused death and destruction across Japan. Three people have died, one other was found without vital signs, 17 people remain missing, and more than 90 people were injured.

Updated on October 13, 1:45 AM: More than 430,000 households were reported to have lost power, with the prefecture of Kanagawa to the south and west of Tokyo worst affected.

Updated on October 13, 1:40 AM: Some 17,000 police and military troops were called up, standing ready for rescue operations.

Updated on October 13, 1:40 AM: Yusuke Ikegaya, a Shizuoka resident who evacuated ahead of the storm, said he was surprised that the nearby river was about to overflow in the morning, hours before the typhoon made landfall.

Updated on October 13, 1:35 AM: "Be ready for rainfall of the kind that you have never experienced," said meteorological agency official Yasushi Kajihara, adding that areas usually safe from disasters may prove vulnerable.

Updated on October 13, 1:30 AM: All flights to and from Tokyo’s Narita and Haneda airports canceled and many subway services and most trains in the Tokyo metropolitan area suspended. Another 800 flights were also canceled Sunday, including many from Tokyo.

Updated on October 13, 1:20 AM: In Hakone, in Kanagawa Prefecture, 37.1 inches of rain fell in 24 hours on Oct. 12, setting a record for that location, according to the Japan Meteorological Agency. In addition, 27 inches fell in heavily forested Shizuoka Prefecture southwest of Tokyo. And in higher elevations just west of downtown Tokyo, 23.6 inches of rain fell, which was also a record for that location.

Downtown Tokyo received about 8 inches of rain for the day, which is an unusually high amount for that location. In addition, high waves and storm surge flooding affected the coastline along and to the southeast of the storm center.

Updated on October 13, 1:10 AM: Hagibis smashed into the main Japanese island of Honshu around 7 pm local time (1000 GMT) as one of the most violent typhoons in recent years, packing gusts of up to 216 kilometres per hour (134 miles per hour).

Updated on October 13, 12:55 AM: Local governments of Tokyo, Nagano, and Ibaraki have requested assistance from Japan's Self-Defense Forces. A few dams in the Kanto region are discharging water as an emergency measure to prevent them from overflowing. Torrential rain is expected to continue with a risk of more flooding, landslides, and gusts of wind. Local officials have issued a warning to take maximum precautions.

Updated on October 13, 12:45 AM: Around 7.3 million people were given non-compulsory evacuation orders, 90 were injured — four seriously — and several others reported missing as flooding hit many towns and cities.

Updated on October 13, 12:30 AM: The Disneyland and DisneySea theme parks in Tokyo were also closed on Saturday.

The Meteorological Agency of Japan moved to a Level 5 warning for heavy rainfall on Saturday afternoon for large parts of central and eastern Japan, talking of “unprecedented rainfall” in many cities, towns and villages, predicting that disasters such as landslides and floods had probably already occurred and warning people to “take measures to protect lives.”

Updated on October 12, 11:50 PM: Tokyo and Chiba airports shutdown in the wake of Typhoon Hagibis

Tokyo’s Haneda airport and Narita airport in Chiba both stopped flights from landing and connecting trains were suspended, forcing the cancellation of more than a thousand flights.

Train operators suspended bullet train services extensively, while many train and subway lines in Tokyo were also down for most of Saturday. Usually bustling entertainment and shopping districts such as Shibuya and Ginza were deserted.

Japanese Formula One Grand Prix organizers canceled all practice and qualifying sessions scheduled for Saturday. Two matches of the Rugby World Cup due to be played on Saturday were also canceled.

One of the most powerful typhoons to ever hit Tokyo paralyzed the Japanese capital on Saturday, leaving millions confined indoors and streets deserted as fierce rain and wind killed two, flooded rivers and threatened widespread damage. Authorities issued evacuation advisories and orders for more than 6 million people across the country as the storm unleashed the heaviest rain and winds in years.

Some 80 injuries have been reported so far, while more than 270,000 households lost power.

The storm, which the government said could be the strongest to hit Tokyo since 1958, brought record-breaking rainfall in many areas, including the popular resort town of Hakone, with a whopping 939.5 mm (37 inches) of rain over 24 hours.

The ferocious Typhoon Hagibis has made landfall in Japan, as torrential rain and winds have already lashed the country causing floods and mudslides.

The eye of Typhoon Hagibis made landfall shortly before 7 pm (1000 GMT) in the Izu Peninsula which is in the southwest of Tokyo.

Since its wicked-fast intensification earlier in the week from a tropical storm to category 5 storm, Typhoon Hagibis has been spinning toward the north-northwest over the western Pacific Ocean.

At least one person has been killed and 33 have been injured as Typhoon Hagibis approached central Japan with hurricane-force winds on Saturday.

However, the storm had weakened as it approached Japan but still remains highly dangerous, with maximum winds of up to 195 kilometers per hour which is equivalent to a Category 3 Atlantic hurricane.

It is very likely that Hagibis will make landfall Saturday afternoon local time. However, already much of troubling has been done over the central and southern parts of Honshu, Japan's main island.

The experts have to say that the winds between 100 and 130 kmph are expected to lash southern Japan, including Tokyo, for most of the mid-morning through the evening. Up to 8 inches of rainfall is also predicted to cause flooding.

Transportation has already been hit hard. All flights to and from Tokyo and nearby airports have been canceled until at least Sunday morning. All bullet trains between Tokyo, Nagoya, and Osaka are also canceled, as are most non-high-speed trains.

It has also come to notice that more than 10,000 households in the Kanto, Chiba and Tokyo areas are without power.