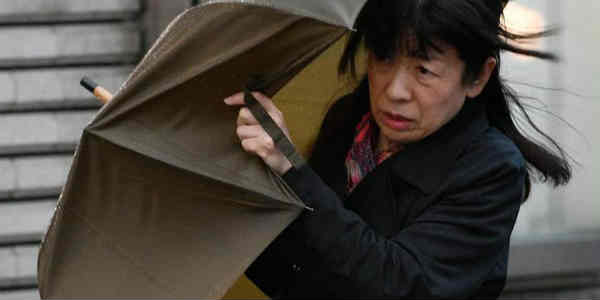 From gigantic to menace, Typhoon Lan was an unforgettable storm. On Friday, the storm exploded — transforming from a minimal Class 1 Typhoon into a Category 4 storm in the past 24 hours.

At that point, even as a weakening Category 2 storm on Sunday, it pounded ashore Japan's east coast around 120 miles southwest of Tokyo and has been blamed for at least two loses of life.

Typhoon Lan made landfall south of Tokyo yesterday morning and was accompanied by strong winds and incessant rains that hampered the country’s transportation system.

Even after the storm passed, strong winds prevailed for a day. Later on, several people were sharing pictures and video’s online of the after effects in their areas.

Nearly around 6 people have been killed when Typhoon Lan beat eastern Japan from Sunday into Monday. More than 200,000 individuals were requested to clear in front of the intense cyclone which reached the super Typhoon status from Friday into Saturday.

The storm is anticipated to help pump up a major edge in the jet stream over western North America not long from now, which will make the jet stream plunge over the Eastern United States, helping the commencement of a cold weather pattern.

As it hit Japan, the storm changed from a Typhoon to a non-tropical storm and is currently clearing over the North Pacific Sea.

While Lan is not anymore a risk to Japan, another tropical depression close to the Mariana Islands could take a track like Lan and approach Japan by end of this week. This new risk is relied upon to be smaller and weaker than Lan.

However, may still be able to bring in incessant rains and strong winds to Japan as early as Saturday or Sunday.

By Saturday, the views of the super Typhoon from space were unbelievable. The storm built up a mammoth eye, 60-65 miles over, with a ring of intense thundershowers encompassing it.

Rainfall totaling more than 800 mm was recorded in Wakayama region. Rainfall aggregates of around 200 mm were also recorded in Tokyo.

With this, the Uda River flooded its banks caused damage to several homes and residential areas. In addition, many cases of Landslides were reported, thus, destroying homes and halting travel ways towards Honshu.