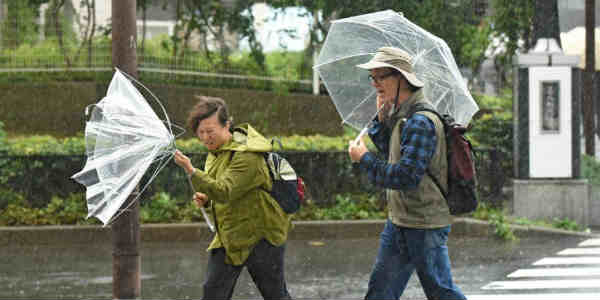 Typhoon Lan made landfall early Monday morning (as per the local timing) along the Japan's southern coast close to Minamiizu. Now, this storm is quickly moving towards the northeast at 59 km/h as stated by Meteorological Department.

Almost three people have died and many have been injured as this massive typhoon struck Japan, tossing dangerous winds and frightening to cause severe flooding and landslides over the country.

As per the Weather Agency of Japan, gusts of up to 198 Kmph had hit the country.

Typhoon Lan is enormous to the point that its cloud field is bigger than Japan. Also, gigantic waves crash onto the coast of Busan, South Korea on Sunday, making the fishing boats barred from going out of the sea.

Starting early Monday, Lan was whipping maintained winds of 165 Kmph which makes it a Category 2 storm, according to CNN meteorologist.

Further, the storm has already caused gigantic waves in South Korea. More than 200,000 people were asked to evacuate, as directed by the Fire and Disaster Management Agency, with a further 2.2 million homes under suggested getting ready for departure.

In addition, in Fukuoka, a city on the southern island region of Kyushu, a 63-year-old man died, when falling construction framework struck him due to powerful winds, reported by the city police.

Despite the fact that the typhoon is weakening, Tokyo is expected to get hit with credibly strong winds and incessant downpours. Meanwhile, a few regions of Japan have recorded rains more significant than 500 mm in the past 72 hours.

Shingu, a city in the Wakayama district southwest of Tokyo, recorded 894 mm of rainfall in the course of past 72 hours as well - their most remarkable rainfall add up to such a period since the city had got 425 mm in 2000.