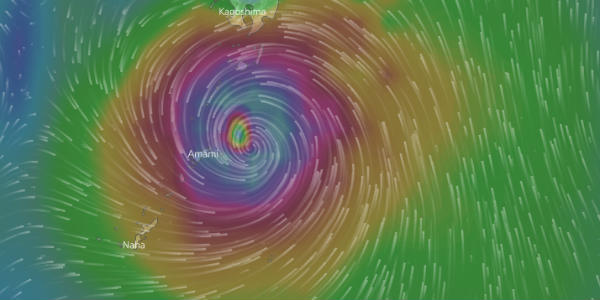 Updated on August 6, 2017: Typhoon Noru which was once the year’s strongest storm is now weakening and has approached the main islands of Japan. With this, at least two people have been killed. Not only this, evacuation advisories have also been issued for the ones residing in the likely to be affected areas.

Heavy rainfall and squally winds occurred in the Amami island chain on Saturday as well as early hours of Sunday morning. Several landslides occurred resulting in one road being crumbled.

Advisories for evacuation was issued for at least 210,000 along Kyushu. As per the Kagoshima government , some people have been lifted in Kagoshima. Nine people have also been injured due to torrential rains.

Heavy rains 34 mm in one hour. However, now the storm will weaken further as it hits Japan’s main island of Honshu on Monday.

It did not take Noru much time to become the strongest storm of the year. Now, Typhoon Noru has come quite near to Japan’s main islands. More rains are expected to lash many areas of Japan as the storm surge has become quite active over the region.

Only last month, many parts of Japan had witnessed a few spells of torrential rains resulting in massive devastation. In fact, at least 36 people had lost their lives and around four had gone missing. Now, more rains are likely to lash these areas.

Heavy rainfall activity is expected over the Amami island chain which is located just south of the southwest main island of Kyushu. In fact, a few spells of torrential rains may also lash the region in the coming days.

As per weather experts, Noru happens to be a slow moving storm which is why rains will be heavier in many areas. Noru which was once a Category 5 typhoon formed around 14-15 days ago in the Northern region of the Pacific Ocean and was hovering around the region in a circle.

However, it did weaken before it headed northwest towards the Japan region. While there is a possibility of Typhoon Noru heading straight to Kyushu and furthermore along one of Japan’s main islands, it is hard to forecast its long term movement.