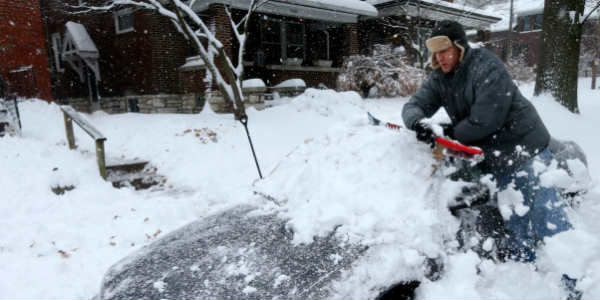 The winter storms in the United States are at their peak and have been wreaking havoc over the Midwest. In fact, the storm has managed to kill at least seven and has caused power outages resulting in several thousand remaining without electricity.

The worst affected was Missouri wherein 18 inches of snowfall was reported, here at least four lost their lives along with several injured. Moreover, hundreds remained stranded on roads, which were slicky and covered with snow. At Lambert International Airport in St. Louis, over 120 flights were canceled.

As per reports, two were killed in Kansas while one died in Illinois. A Delta plane also slid off at one of Cincinnati/Northern Kentucky International Airport’s snow-covered runways in Kentucky. Over a foot of snow was observed in Illinois, Iowa, Nebraska, Kansas, and Colorado

Virginia State Police has had 300 traffic crashes reported and helped 200 disabled vehicles. At least 20,000 people have been observing power outages in North Carolina as well as Virginia. In fact, a state of emergency has been declared by the governor of North Carolina so that utility crews restore electricity in a quicker way.

This winter storm event may last for about 2 days in some parts of the United States.

Now, the storm is moving to the Northeast. 10 inches of snow has covered Washington, D.C. In fact, another light burst of snow is likely over parts of Washington DC and surrounding areas resulting in extremely poor travel conditions, similar weather is likely for Maryland and Virginia.

Close to 12 inches of snow was seen in the mountainous parts of California along with sleet over areas higher than 5,000 feet. Rain and snow in California is likely to continue with snowfall over Southern Sierras. Storm is also likely to hit Sacramento wherein two feet of snow is likely in parts above 5000 feet. Moreover, rain in many parts will continue until late week.