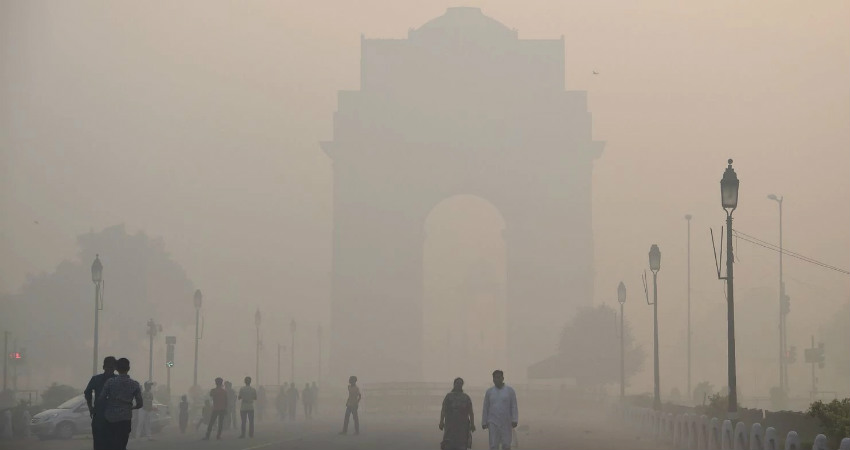 Delhi has once again turned into a gas chamber. The months of October and November spell disaster for the air quality across Delhi-NCR and this year is no exception. These months coincide with the festival of Diwali and the harvesting of paddy in Punjab and Haryana and other states of North-West India. Weather also plays a huge role in the acceleration of air pollution levels. Monsoon starts withdrawing from North-West India and winds start to change directions. Light winds, high humidity, cool temperatures and smoke from stubble burning are major factors contributing to the severe air pollution.

The surface winds were light to calm in the last few days. Consequently, the pollutants were not allowed to disperse and kept on accumulating. On the other hand, winds at the higher levels ranging from 5000 to 7000 feet, were flowing from the North-West. These winds carried the smoke from stubble burning towards Delhi and NCR. The pollutants contained in those winds subsided in the lower atmosphere and added to the already severe conditions over Delhi.

Right after Diwali, Delhi and NCR have been witnessing one of the worst Air Quality of this season. On November 2, many areas of Delhi and NCR recorded hazardous Air Quality Index (AQI) levels wherein PM 2.5 crossed the mark of 1000. Although the pollution levels have lowered, AQI is still around 588 today.

On the evening of November 3rd, AQI had crossed the 700 marks. The winds picked up pace from the evening of November 2, but they failed to decrease the pollution. Patchy rains were seen over parts of Haryana, Rajasthan, and Delhi NCR on the same day. These rains were light and patchy and were not widespread activity across the region. Therefore, they failed to wash away the pollutants. On the other hand, these rains increased the humidity levels that have resulted in the formation of shallow fog.

However, now we expect the cloud cover to fade away. The temperature will rise, and the smog layer will lift. Moderate winds from North West will also facilitate the dispersal of pollutants. Therefore, we can expect some relief. But the relief will not be significant. Pollution levels will come down to very poor-poor category from severe to hazardous.

The good news is that the rains are expected to commence over the Northwestern Plains especially over Punjab, parts of Haryana and West Rajasthan on November 6. By November 7, many parts of Haryana, East Rajasthan as well as Delhi and NCR will witness rain and thundershower activities. It is likely to be a widespread activity with light to moderate showers in sight. These rains will help wash away the pollutants and Delhi can breathe easy for at least some time. The formation of a Western Disturbance and the influence of Cyclone “Maha” will cause these rains and it will also reach the Gujarat coast. Due to this, humid winds will reach up to Northwest India.

Thus, we can say that significant relief in pollution levels is foreseen in the wake of the upcoming rains. Till then Delhiites will continue to inhale toxic air.

The Rabi season in India is largely dependent on the Monsoon rainfall. Rabi crops such as Wheat is mostly an irrigated crop and Mustard, Bengal Gram, Rabi Jowar, Pea Lentil, and other small Rabi crops are grown on residual soil moisture. India has received excess rainfall during the current monsoon season. Although the rainfall has been adequate over most parts of the country, the temporal distribution of the rains has not been so conducive for the Kharif crop. The Monsoon rains started late and have continued even till the month of October with significantly excess rainfall in some parts of Western India. This has not only impacted the sowing of the crops but is also likely to hit the yields and the harvest output in the Kharif season.

The higher amount of rainfall in the late half of the Kharif season will ensure well for the ensuing Rabi food crop. The soil moisture levels in most parts of the country are conducive for a record Rabi output in the coming season unless there are further weather vagaries. Also, water levels in most of the reservoirs have reached high levels and will support Rabi crops in case there’s a deficiency of soil moisture.

In the upcoming Rabi season, the area under wheat, Bengal Gram, Barley, Mustard, and Rabi Jowar is likely to increase due to the availability of enough soil moisture owing to the late rains in October. In some states like Maharashtra, sowings will be delayed due to the late harvesting of Kharif crops.