Hyderabad, where you can eat Biryani, enjoy the Char Minar essence like a Nawab

Hyderabad is one city that lures in the old and the young both. The city has more of history, but it isn’t short of anything that a young mind craves for. Whether you’re a history-buff, culture enthusiast, or a foodie, you’ll never run short of things to do in Hyderabad. A melting pot of Hindu and Muslim cultures, the city is home to multiple heritage structures that take us back in time.

Let’s guide you through the major climate pattern here and what is the best season to visit the place!

Winters are quite comfortable in the city and usually the temperatures remain on the pleasant side.  The average winter temperature is around 20-24° Celsius, but this can go down to around 12 to 13° Celsius during the month of December, which is often the coldest month here.

The south-west monsoons bring in the rains and Hyderabad receives around 810mm of rain annually. Monsoons come as a relief as temperature drop during this season.

Summers (March to May)

Temperatures in Summers might peak to as much as 40°C with scorching sunny days. Probably not the best bet you can place for a visit to Hyderabad!

Things to do in Hyderabad 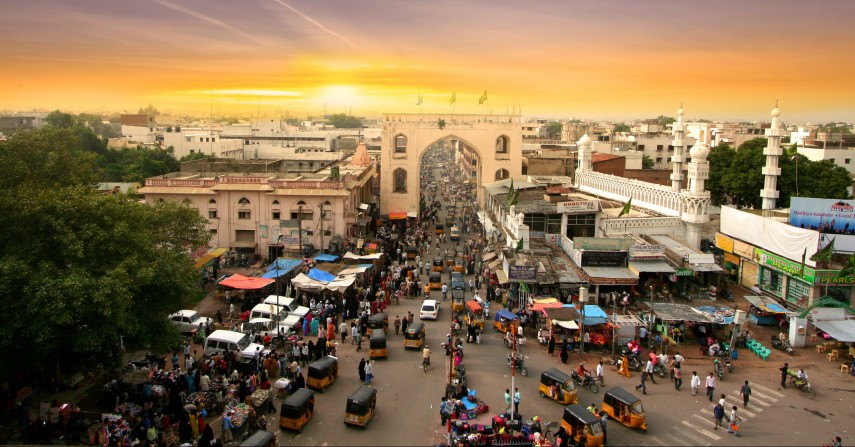 The city is known for its biryanis and kebabs. If you have been to Hyderabad and you haven’t tasted the famous Biryani here what have you even tasted? From the captivating landmarks such as Charminar and Chowmahalla Palace to the impressive hilltop fort, Golconda, Hyderabad is peppered with history that takes you back in time in a click. Go roam around the Ramoji Film City and you will get the glimpse of the life behind the camera. Hussain Sagar is another spot to immerse in for a peaceful sight.

The record holding India's first Ikea showroom is the recent addition to one more reason why you should definitely visit the city.