A glance at Rabi Crop this season amid crop damage 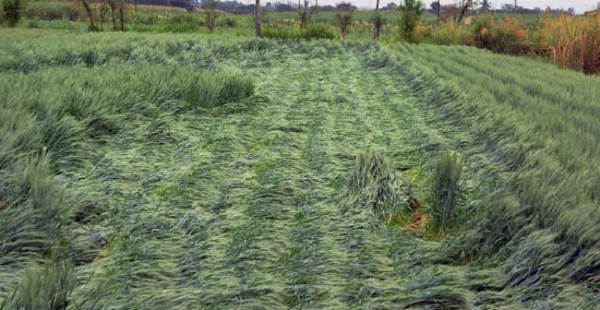 Price of wheat, Mustard, Fenugreek, Black Gram, Peas, and many lentils are all set to soar high this season. Well, there are two reasons behind this price hike. First, this Rabi season has seen 27 lakh hectares less sowing in comparison to the last year. Second, series of rainy spells accompanied with some intense hail storm across Northwest India has led to crop lodging.

According to the numbers released by the Ministry of Agriculture, till February 8, 610.92 lakh hectares sowing has been seen across India in comparison to 638.13 lakh hectares last season, recoding a gap of approximately 27 lakh hectares.

Among all the grain crops, paddy has seen the lowest sowing this season. With 16.23% less sowing, paddy has this time seen sowing of 29.56 lakh hectares. However, last season it was 35.29 lakh hectares.

Meanwhile, wheat has been sown in almost the same quantity as last year. Last season had seen 299.84 lakh hectares of sowing as compared to 297.54 lakh hectares this year.

Talking about the coarse cereals, they have witnessed the deficit sowing progress by approximately 15%, with Maize witnessing a lag of 11%, while Bajra noticing the highest lag of 58.5%.

Oilseed sowing across India is the only one which has seen a marginal dip of 0.7% this year. However, Sunflower and Safflower have noticed a drastic gap of 44.19% and 34.5%, respectively but Sesamum and Mustard remained progressive with higher sowing this time by 13.2% and 3.4%, respectively this year.

Unseasonal rains and hailstorm caused damage to wheat, fenugreek, lentils, mustard, and particularly to opium crop in Madhya Pradesh mostly in the Dalauda, Shamgarh, Nahargarh districts have seen damage of over 90% of the opium crop.

Scenario was somewhat same in Punjab and Haryana. While Potato in Punjab is been remarkably affected by the recent hailstorm, Mustard in Haryana is also damaged significantly by the untimely rains and hailstorm. Potato in western Uttar Pradesh too has been affected.

The early varieties of wheat which was in standing got flattened in most of the places in Punjab and Haryana, however late sown wheat has been less affected. Pulses, standing crop including the gram, pigeon peas and lentils are severely been affected by the recent hailstorm in Bihar and Eastern Uttar Pradesh too.

The exact percentage of damage however is yet to be assessed.