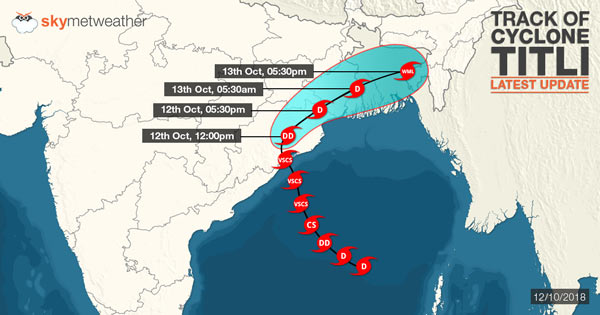 Cyclone Titli which had weakened into a Depression on Friday, has now further weakened into a well-marked low-pressure area over Gangetic West Bengal and adjoining areas.

With this, we expect fairly widespread rains at many places with some heavy spells at isolated parts over south Assam, Meghalaya, Mizoram, Tripura and Manipur during the next 24 hours. Gangetic West Bengal including Kolkata would too continue with rains but with reducing intensity.

As per weathermen, with the system moving northeast direction, rains would now focus over northeastern region.

The system would be accompanied with the strong winds to the tune of 30-40 kmph gusting to 50 kmph. The Sea conditions would also continue to be rough along and off West Bengal coast today.

Cyclonic Storm Titli has weakened further into a Deep Depression over Odisha. In fact, cloud configuration and atmospheric conditions are already indicating that the system is no more than a depression.

As per weathermen, center is no more clearly defined, and cloud mass is also getting defused. The system is in re-curvature phase as it is moving east-northeastwads, which is slowing down its speed. Also, during this time, rain belt also moves forward, giving majority of rains over the approaching areas.

Talking about rains, the system would give fairly widespread heavy rains with some very heavy rains over Gangetic West Bengal, Assam, Mizoram, Tripura and Meghalaya during the next 24 hours.

With the storm moving away, rains would now start vacating parts of Odisha. However, light to moderate rain and thundershowers will continue.

After weakening into a cyclonic storm last night, Titli is now all set to lose some more strength and become a deep depression anytime now. In fact, the storm would see rapid weakening as we expect it to become a depression by Friday afternoon.

The system is presently seen moving across Odisha around 50 km east of Titlagarh. As predicted, Titli has re-curved northeastwards and is likely enter West Bengal shortly. The storm would be accompanied with squally winds with the speed of 40-50 kmph gusting up to 60 kmph.

In view of this, rains are now all set to increase over West Bengal, which would mainly see moderate to heavy rains with few very heavy spells.

Very Severe Cyclonic Storm Titli has finally weakened into a severe cyclonic storm over Odisha. The system has been moving at a speed 14 kmph and is presently centered near latitude 18.8°N and longitude 84.4°E, about 130 km southwest of Gopalpur.

The system is shortly likely to re-curve in northeast direction and move towards West Bengal across Odisha. By late evening or midnight, the system would further weaken into cyclonic storm and thereafter into deep depression by the time reaches West Bengal during the wee hours of Friday.

The system be accompanied with high velocity winds to the tune of 80 kmph-90 kmph gusting up to 100 kmph. According to Skymet Weather, the worst is over and we expect recovery over Odisha in span of 12 hours.

Updated on Oct 11, 2018, 7 AM: Very Severe Cyclone Titli hits Gopalpur; torrential rains wreak havoc in Odisha, danger not over yet

The system was accompanied with high velocity winds to the tune of 126 kmph at the time of landfall. The system has already given extremely heavy rainfall over many parts of Odisha, with Digha recording 142 mm of rains, Balasore 109 mm, Bhubaneswar 69 mm, Puri 79 mm, and Gopalpur 75 mm in span of 21 hours till 5:30 am on Thursday.

At present also, torrential rains have been lashing many parts of Odisha, with damage potential squally winds wreaking havoc across the state. According to weathermen, danger is not over yet as Titli would now recurve and track northeastwards and travelling along the coast across Odisha.

This would keep Odisha on risk for another 24-48 hours, which would see more flooding rains today. North Andhra Pradesh would also see heavy to extremely heavy rains, while Gangetic West Bengal would also begin with heavy to very heavy rains now. Over 3 lakh people have been evacuated so far, with over 1000 NDRF personnel deployed across the affected areas.

Heavy rains have already led to cut off road to Gopalpur, while several trees and electric poles have been uprooted.

Moving in favourable weather conditions, Very Severe Cyclonic Storm Titli over west-central Bay of Bengal has now intensified into Extremely Severe Cyclonic Storm. This storm is now equivalent to Category 2 hurricane as the associated winds with this system are in excess of 165 kmph. As reiterated, this rapid intensification is on account of very warm sea surface temperatures and low vertical wind shear. The system is presently centered at latitude 17.7°N and longitude 85.2°E, about 170 km south-southeast of Gopalpur, Odisha) and around 120 km southeast of Kalingapatnam. The system has been tracking north-northwestwards and will continue to move in the similar direction. Titli is likely to cross the coasts of Odisha and adjoining north Andhra Pradesh, close to Gopalpur during the early morning hours of October 11. However as Indian coasts near, the system would start weakening and might cross the coast either as Very Severe Cyclonic Storm or Severe Cyclonic Storm. Peripherals of the cyclonic storm has already started affecting the weather over Odisha and Andhra Pradesh. Heavy rains have already lashed many parts of Odisha that includes Digha that has recorded whopping 121 mm of rain in span of 12 hours from 8:30 am on Wednesday and Balasore 86 mm. Puri has also recorded 31 mm during this time. In wake of this, thousands of people have already been evacuated from the low lying areas. NDRF (National) personnel are also on standby.

The very severe Cyclonic Storm Titli continued moving in north/northwest direction with a speed of about 15 kmph and at present is centered at 17.5˚N/85.5˚E, about 180 km south/southeast of Gopalpur (Odisha). The winds in association with this cyclone are continuously increasing in speed. Wind speed is around 15 kmph in gust with 170 kmph. The severe storm is likely to hit the coast by tomorrow morning around 05:00 AM – 08:00 AM, between Gopalpur and Kalingapatnam and move about 100 km inland. Thus, we can say that heavy to extremely heavy rains are expected to lash the coastal districts of Odisha by tomorrow. Five coastal districts of Odisha have been put on high alert. In wake of these torrential rains, all the schools and colleges in Odisha have been declared closed. Thereafter, it is very likely to recurve northeastwards and move towards Gangetic West Bengal across Odisha and weaken gradually.

As predicted, severe cyclonic storm Titli has further intensified into a very severe cyclonic storm, which is equivalent to Category 1 hurricane. It is one of the exclusive storms to see rapid intensification, crossing three major stages, from deep depression to cyclonic storm to very severe cyclonic storm in just 24 hours. According to Skymet Weather, the credit goes to very warm sea surface temperatures to the tune of 30°C-31°C and low vertical wind shear. Along with this, MJO which is currently in phase is likely to enter Indian Ocean, which is favourable for enhancement of this system. As reiterated, Titli would make landfall over Odisha coast as very severe cyclonic storm. However, the good thing is that it would not travel in land much, just about 100 km and then re-curving. It would be moving along the East Coast, crossing Odisha and entering West Bengal and further up to Bangladesh. The system would be accompanied with high velocity winds with speed of 150 kmph, gusting up to 160 kmph to 180 kmph. Weathermen are of the view that wind speed might even match up to the speed of Category 2 hurricane.

Moving in favourable weather conditions, the Cyclonic Storm Titli has intensified into a severe cyclonic storm over west-central Bay of Bengal. In fact, cloud configuration and atmospheric conditions are indicating further strengthening of the system into very severe cyclonic storm anytime now, equivalent to Category 1 hurricane. Titli is presently centered at Latitude 16°N and Longitude 85.8°E, about 360 km south­/southeast of Gopalpur, Odisha and 305 km southeast of Kalingapatnam, Andhra Pradesh. As per Skymet Weather, the system is moving at a slow pace in north­-northwest direction. It is make landfall as a very severe cyclone over Odisha and adjoining north Andhra Pradesh between Gopalpur and Kalingapatnam by the morning of October 11. As reiterated before, the system is not likely to travel deep inside the land and would re-curve northeastwards and skirt along the East Coast towards Gangetic West Bengal and further to Bangladesh and Northeast India. Cyclone Titli would start weakening once it would hit the coast. The sea conditions would be rough to very rough off and along the East Coast. Locals and fishermen are advised not to venture out in the sea. The cyclone  is likely to bring heavy to extremely heavy rains over coastal areas of Odisha and North Andhra Pradesh on Thursday. Interior parts of the states and Gangetic West Bengal would see moderate to heavy rains.

The Deep Depression which was over west central Bay of Bengal has further intensified and become a Cyclone named Titli which followed a northward movement. Now, the system is likely to move north northwestwards and will be 100 km short of coast by tomorrow night. Moreover, the system is likely to cross coast by the morning of October 11 near Gopalpur. Winds are about 70 kmph gusting up to 85 kmph which will further pick up pace. In fact, the possibility of the Cyclone intensifying into a Severe Cyclonic Storm cannot be ruled out as well.

The Deep Depression over east-central Bay of Bengal has now further followed a west­-northwest track at a speed of about 10 kmph moving towards West Central Bay of Bengal near Latitude 14.7°N and Longitude 87.1°E, 560 km SE of Gopalpur in Odisha, 510 km SE of Kalingapatnam in Andhra Pradesh. The system will soon intensify into a Cyclonic Storm shortly, during the next few hours or so.

The Indian Ocean is an active zone at present and is throwing in a number of disturbances. Moreover, a Cyclone named Luban, the first of the Post Monsoon season has already developed over the Arabian Sea.

A Cyclonic Circulation had developed over North Andaman Sea and adjoining areas. The system had intensified into a Well-Marked Low Pressure Area. Now, the system has further intensified and shifted northwestwards and lies over east-central Bay of Bengal near Latitude 14.0°N and Longitude 88.8°E as a depression, about 720 km SSE of Gopalpur in Odisha, 690 km SE of Kalingapatinam in Andhra Pradesh.

The system is in favourable conditions wherein the sea surface temperature is quite high and wind shear is also favourable. The system is very likely to intensify further into a Deep Depression during next 24 hours and into a Cyclonic Storm called Titli (name given by Pakistan) in the subsequent 24 hours. Moreover, the system will move northwestwards towards Odisha and adjoining north Andhra Pradesh coasts during next 72 hours.

Rainfall activity is expected over Odisha, West Bengal as well as North Coastal Andhra Pradesh around October 10, 11 and 12. Rains will be quite heavy to very heavy over the coastal regions of Odisha as well as adjoining West Bengal and isolated pockets of Andhra Pradesh. Meanwhile, after the system becomes a Cyclone, it is expected to recurve and move towards Bangladesh giving heavy rains over the area. In fact, hefty showers are expected over Northeast India including Tripura and Mizoram in particular between October 11 and 13, while rainfall will remain moderate to heavy over Nagaland and Manipur as well.

First Century Rainfall Of Mumbai In August, More Showers Ahead

Weather update and forecast for August 10 across India

Heavy rains in Gujarat, as Monsoon gets active in parts