After most delayed retreat in 59 yrs, Monsoon is also be the quickest to leave India as it vacates MP 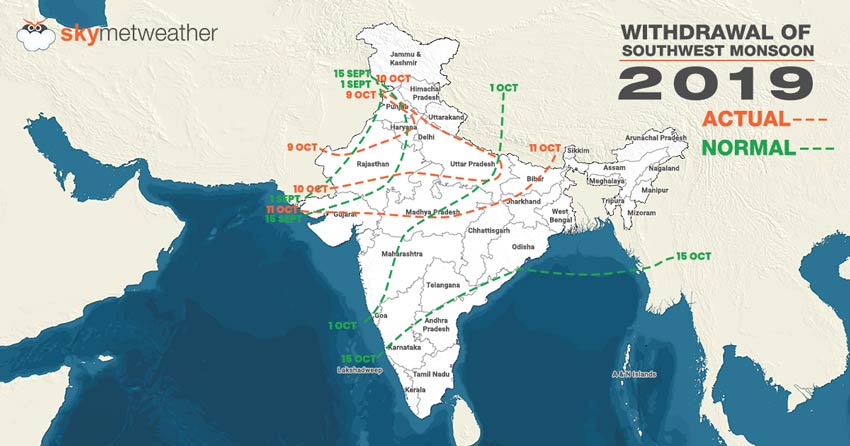 Much awaited withdrawal of the Southwest Monsoon had finally begun on October 9. The process to retreat from the country has started after almost 40 days later than the normal date. With this, it is the most delayed monsoon retreat in last 59 years. Formation of back to back weather systems in September kept the Monsoon going on, this season.

The withdrawal was announced after two out of three criteria for withdrawal of Monsoon were met. There has been a persistent anti-cyclonic over West Rajasthan and gradual reduction in moisture.  However now, significant reduction in the rainfall is seen, which is the third criteria for the Monsoon retreat.

Prior to 2019, the most delayed Monsoon withdrawal was seen in 1961, where it started its reversal journey on October 1. Thereafter, 2007 had seen a delayed withdrawal that commenced on September 30.  However, it is not just the delayed one but also one of the quickest Monsoon to withdraw from the country ever since the records have been maintained.

Similar conditions were seen in 2012, wherein the withdrawal of Southwest Monsoon had begun on September 24 and by September 25, it had retreated from West Uttar Pradesh and Gujarat also.

According to weathermen, weather conditions are ripe for Monsoon to vacate entire Central India, along with parts of East and West India.

By this time of the year, winds start blowing from northeast direction over South Peninsula, making conditions conducive for rains over the region. First fortnight of October is also considered to be the changeover period from Southwest Monsoon to Northeast Monsoon.

Usually, the retreat of Monsoon is usually followed till 15°N i.e. Goa on West Coast and Machilipatnam on East Coast. Thereafter, the ongoing rains are conceived as Northeast Monsoon rains.