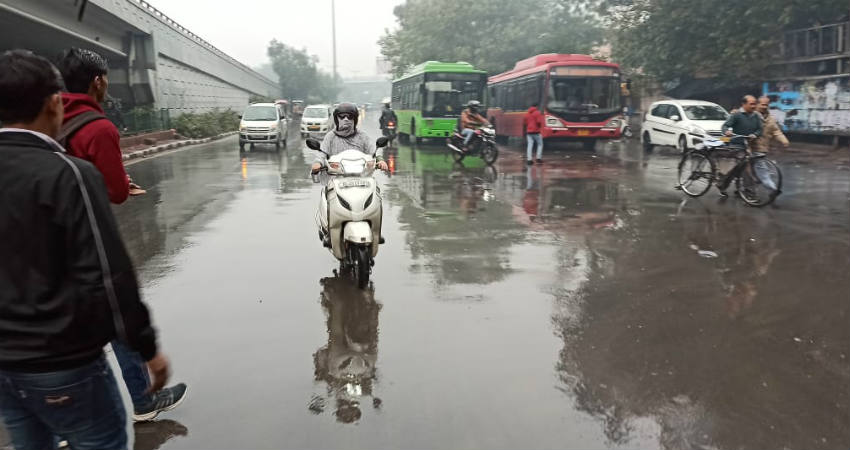 In fact, in the morning hours, between 9:00 am and 10:00 am, intense showers were witnessed over South Delhi and NCR region of Faridabad. Now also, on and off rains have been going on over many parts of Delhi NCR, which will continue until late afternoon hours.

By evening hours, the weather will clear up as the Western Disturbance will move away. Moreover, the Trough which has been exetnding from Punjab across Delhi up to East Uttar Pradesh, will shift towards the north, resulting in clearance.

However, sky may remain cloudy to partly cloudy until tomorrow morning, we expect wind direction will also change from easterly to westerly and northwesterly, leading to significant drop in the minimums of Delhi NCR and most parts of Northern Plains.

This drop will be short lived as another Western Disturbance will approach the Western Himalayas around January 11, which will once again change wind direction and increase minimums.

Published on Jan 8, 09:00 AM: After observing light showers yesterday, the conditions are favourable for rain in Delhi and NCR today as well. In fact, light drizzle has already begun in some parts of the National Capital and would cover more parts as the day progresses.

According to the data available, Safdarjung Observatory recorded 6 mm of rain, followed by Palam 5 mm in a span of 21 hours until 5:30 am today. The rainfall activity of similar intensity is likely today as well in parts of Delhi and its adjoining areas of Noida, Gurugram, Ghaziabad and Faridabad.

However, these rains would not continue for long and we expect the weather to go dry quickly, say after the next 24 hours. Post this, the minimums are expected to drop by 4 to 5 degrees Celcius owing to the cold and dry north-westerlies.

Amidst dropping temperatures, Delhiites are most likely to wake up to dense to a very dense layer of fog, leading to poor visibility levels. And the winter chill would certainly intensify.

The direction of these north-westerlies might once again change around January 11, as weather models are indicating the approach of another Western Disturbance. This system would bring along a fresh spell of rain and thundershowers for Delhi and NCR on January 12 and 13.

Rains during the last two days have certainly helped the pollution levels to improve to some extent. AQI in most parts of Delhi was recorded in ‘moderate to poor’ category yesterday. However, as rains are likely to take a backseat after the next 24 hours, we fear that Delhiites might yet again have to battle bad air quality.