Heavy rains have been hammering the northeastern states of the country from last many days. So much so that these torrential showers have even worsened the flood situation in Assam and Arunachal Pradesh. These heavy showers not only dislocated more than a lack of people but also reportedly took two lives.

In Assam, the flood condition continues to remain grim as it has affected more than 3.5 lakh people across 13 districts. The flood situation affected over 740 villages across the districts of Assam that includes Lakhimpur, Jorhat, Golaghat, Biswanath, Karimgaj, Sonitpur, Darrang, Barpeta and Nagaon. In addition to this, over 14, 884 hectares of farmland has also been affected badly with these torrential showers. 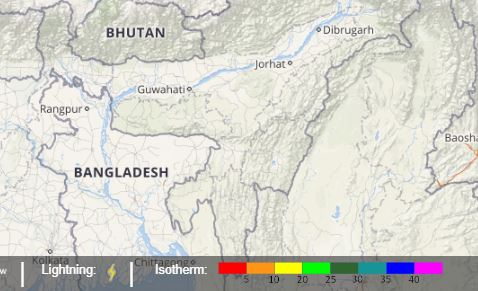 In addition to this, the incessant rains over Arunachal Pradesh also led to a major erosion of roads between Naharlagun and Itanagar. In fact, in view of heavy fog and rain in Itanagar today, the State Union Minister’s helicopter has to make an emergency landing near Itanagar.

As per Skymet Weather, at present also, moderate to heavy rains are going on. Moreover, with the presence of a cyclonic circulation over Sub-Himalayan West Bengal and Sikkim and adjoining north Bangladesh, heavier to very heavy rains are likely to occur over parts of West Assam that would further aggravate the flood situation.

Thus, moderate to heavy showers are likely over Assam for the next 2-3 days but thankfully, rain intensity will be marginally less over Arunachal Pradesh, Manipur, and Mizoram.

Additionally, another cyclonic circulation is over Gangetic West Bengal and a trough is extending from Sub-Himalayan West Bengal to this system, therefore, one or two heavy spells may even occur over Tripura.

Hence, in a nutshell, almost the entire Northeast India will receive good rains for at least next 48 hours.