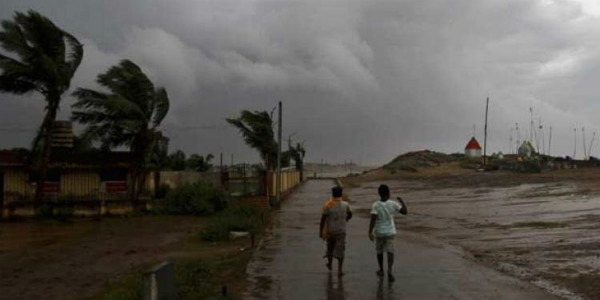 The well-marked low-pressure area in the Bay of Bengal is all set to revive the rainfall in Andhra Pradesh and Odisha. Both the state neighbouring states, particularly coastal parts will see the major rainfall activity during the next 24 hours.

According to Skymet Weather, the well-marked low-pressure area is most likely to sustain its strength for some more time. It continues to move in the north-northeast direction. Thus, the system which was earlier seen over southwest Bay of Bengal is now seen over the west-central Bay of Bengal.

As a result, rains are now likely to pick up pace across Odisha and Andhra Pradesh. Let us have detailed look at the rain forecast for both the states.

During next 24 hours, moderate to heavy rains and thundershowers are likely to lash Coastal Andhra Pradesh. Few spells of very heavy rains also cannot be ruled out during this time.

Strong gusty winds with thunderstorm and moderate lightning strikes are likely over some areas. Chittoor, Nellore, Godavari, Srikakulam, and Visakhapatnam are some of the places which would be most affected.

Meanwhile, interior parts of Rayalaseema will see light showers only. However, with the system tracking ahead along the East Coast, rains are likely to reduce after the next 24 hours.

The intensity of rains would be more over Odisha. Heavy to very heavy rains are likely to batter Odisha coast for the next 48 hours.

Strong winds to the tune of 40 kmph to 60 kmph are likely to blow across the state. Several places might also witness thunderstorm and moderate to intense lightning strikes.