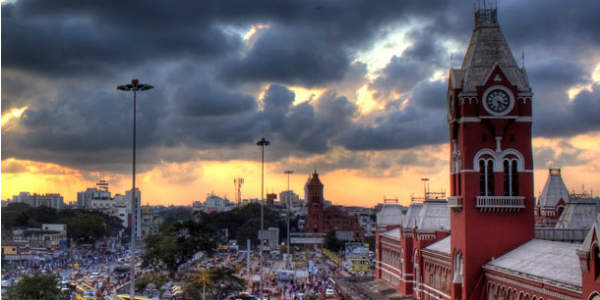 Chennai rains are all set to finally make a comeback over the city today. According to Skymet Weather, the state capital would get to see light to moderate rain and thundershowers on Friday as well as Saturday.

Sky has already become cloudy and rains are likely to make an appearance by the evening hours. Weather conditions would remain conducive for rains to continue for another 24 hours.  The intensity of rains would be more on Saturday over Chennai, while Friday may settle with light showers.

These approaching showers are on account of multiple weather systems across Peninsular India. A north-south trough can be seen running from Telangana up to North Tamil Nadu. Besides this, an anti cyclone is seen over Bay of Bengal, which has been infusing moisture over the region.

Not only this, a low pressure area is in Arabian Sea. Although the system is far away from the coast to have direct impact but it has been definitely influencing the wind pattern.

With the beginning of March, we have entered into the pre-Monsoon season. This anti cyclone and trough is an indication to the onset of the season, said AVM GP Sharma, President- Meteorology and Climate Change, Skymet Weather.

During this time, temperatures are triggering factors for the weather activity. Presence of moisture in atmosphere and rise in day temperatures, lead to formation of convective clouds, leading to rain and thundershowers. These activities usually take places during the later part of the day.

February and March are least rainy months for Chennai, with mere average rainfall of 3.4 mm and 3.5 mm, respectively. Thus, going by this standard, weathermen are predicting some moderate showers for the city and it may surpass its monthly average too.

Since these activities would generally occur during the later afternoon or evening hours, it would not have marginal impact over temperature profile and day temperatures would hover around 31°C or 32°C.