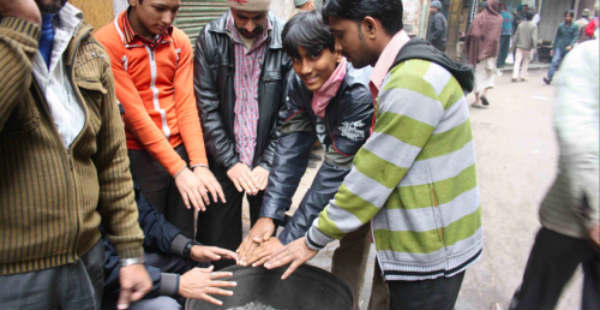 After a concise relief, the weather conditions once again turned chilly in most parts of Uttar Pradesh, including the capital city, Lucknow and neighbouring regions on Tuesday. In fact, Lucknow witnessed fog on Monday that descended until early Tuesday morning with the visibility dropping to mere 50 meters.

Poor visibility even affected the daily movement on the streets and people setting up blazes to comfort themselves were spotted at most open places and markets. Today at around 11:30 am, the maximum temperature of Lucknow was recorded to as low as 9°C.

In fact, most parts of Uttar Pradesh have been witnessing dense to very dense fog for quite some time now. The minimums are also dropping to single digits over almost the entire state with a slight increase in parts of northwestern regions of the state. However, the day temperatures are still on the lower side.

In the last 24 hours, due to the commencement of the moderate northwesterly winds, the intensity of fog reduced marginally leading to a rise in the day temperatures and abatement of cold day conditions from some parts of the state. However, fog persisted in some of the cities.

Cold day conditions prevailed in cities such as Bareilly, Gorakhpur, Shahjahanpur, and Sultanpur. It was due to these harsh weather conditions and mist related mishaps that some deaths were also reported in parts of the state.

Reportedly, six trains were cancelled because of long deferrals caused by haze and poor visibility. Many state-owned buses likewise stayed off the imperative Lucknow-New Delhi and Lucknow-Gorakhpur divisions.

As per Skymet Weather, the northwesterly winds are now expected to pick up the pace and hence in the next 2-3 days, the intensity of fog is expected to gradually reduce thus leading to a rise in the day temperatures further resulting in abatement of cold day conditions from some more parts of the state.

Until then, cold day conditions are expected to persist over Lucknow, Kanpur, Shahjahanpur, Bareilly, Moradabad and Rampur.