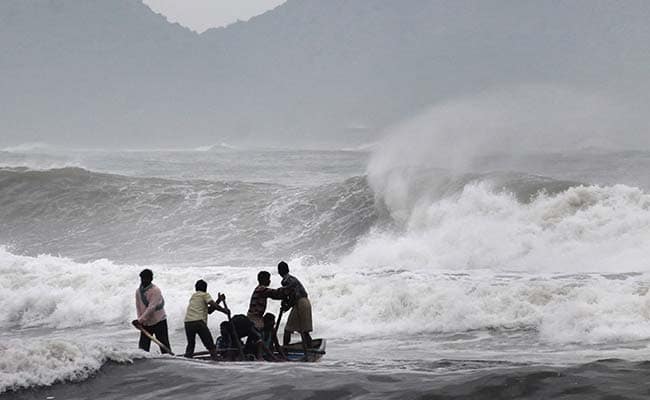 Moving northeastwards, the Extremely Severe Cyclonic Storm Fani has now reached very close to the Indian coast. It is presently centered near Latitude 17.3°N and  Longitude 84.8°E, exactly abeam Visakhapatnam with distance of mere 150 km. Meanwhile, it is about 300 km away from Puri, Odisha.

As a result, rains are now likely to intensify across North Andhra Pradesh coast and we can expect some heavy to extremely heavy showers over places like Srikakulam, Vizianagaram and Vishakhapatnam. These rains would be accompanied with strong winds, which would also now take dangerous turn. We expect, strong winds to continue over coastal areas of Andhra Pradesh.

During all this time the sea conditions will be rough to very rough until May 4. Precaution should be taken especially in the north-coastal districts as these areas fall in outer periphery of the cyclone.

We do not expect much rains over southern parts of Andhra Pradesh, but the sky will remain cloudy to overcast with a dense cloud cover.

After 24 hours, the rain intensity will start reducing but scattered light rains, will continue. Wind speed will also start decreasing as the Cyclone Fani makes a landfall over Puri in Odisha during the morning or forenoon hours on May 3.

As it makes a landfall, the cyclone will start losing its strength while moving in northeast direction away from Andhra Pradesh. After the Cyclone Fani starts moving away, cloud cover will take over the entire state. Due to this, the temperatures will fall marginally, and thus pleasant and comfortable weather is expected for the next two to three days before dry and sultry weather once again takes over.