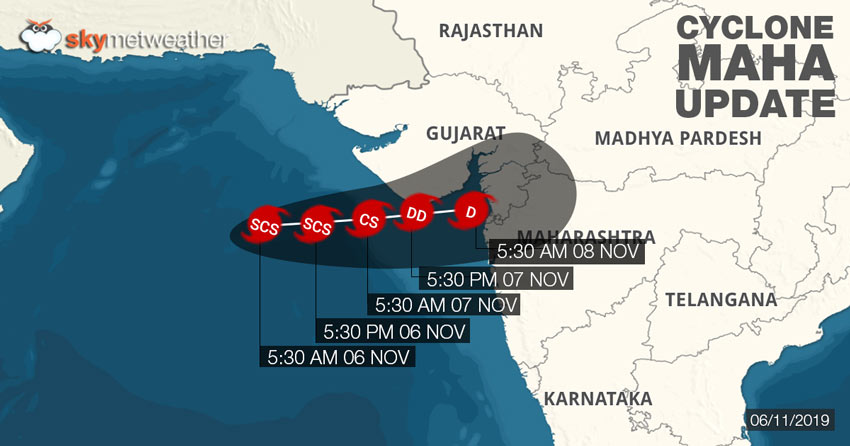 Cyclone Maha, which has been traveling in the Arabian Sea is now getting closer to the coast. In fact, as the storm gets nearer to landfall, it has started to lose some steam.

There are several scenarios at present, the first one being that it will continue to move towards the coastline, keep losing strength and fizzle out gradually, being just be a depression before it reaches the coastline.

Secondly, some models also state that it may not even make a landfall and may remain south of its track and the centre may remain at the sea.

Thirdly, Maha may not touch the coastline, and remain south of it as a weaker system, which is the least possibility as of now.

There are number of models showing some inconsistency and are not in broader agreement with each other. However, one thing that all models agree upon is the fact that the storm will lose steam and not be close to the coast as a strong system.

Dynamically, and climatologically, we are of the opinion, that it will continue moving eastwards, but it may lose steam and may fall short of a storm and affect as a Depression only.

Even though the system is expected to remain as a Depression, coastal parts of Gujarat including Gir Somnath, Diu, Veraval, Mahua, Surat, Navsari, Bharuch, Vapi, and Valsad may see moderate rains with isolated pockets witnessing heavy rainfall activities.

Some rains might also be seen in interior parts of Junagadh as well as Amreli. Sea conditions will still remain rough and fishermen are advised to exercise some caution.