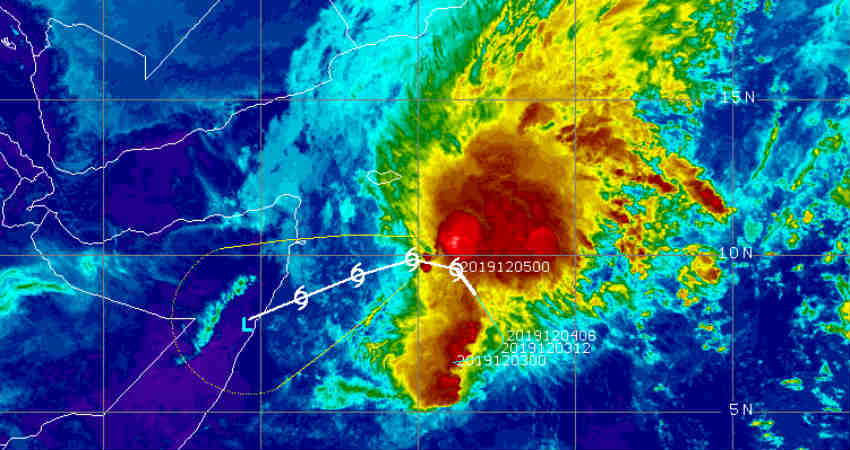 Updated on Dec 5, 12:05 PM: Cyclone Pawan, eight cyclone this year to have formed in the Indian seas is heading for Somalia and is at present, 300 km away from the coastline of Somalia and 800 km south southeast of Salala in Oman.

The Cyclone will not see further intensification and will steadily lose its strength. The storm will have a westward track in the coming, after which it will move southwards. Pawan will strike about 200 km north of capital city, Mogadishu on December 7. India is not likely to be affected by the storm, due to it being far away from the Indian coastline.

Published at an earlier date: According to Joint Typhoon Warning Center (JTWC), it has already intensified into a Cyclone Pawan, as per the naming guidelines set by the World Meteorological Organisation (WMO), which is centred 6.5 degrees North and 56.2 degrees East which is about 700 km south/southeast of Socotra Island.

It was a quick journey from Depression over the Southwest Arabian Sea to a Deep Depression. Travelling in the favourable weather conditions, gradually the system is intensifying and is moving little northwestward. Later on, it will move westward and will head toward Somalia Coast.

The name 'Pawan' for the next cyclone has been set as per suggestion by Sri Lanka. The naming of cyclones follows the guidelines set by the WMO, which stipulates that the countries in the region must name storms in any ocean basin.

Cyclone Pawan is the eighth cyclone to form over the north Indian Ocean this year.