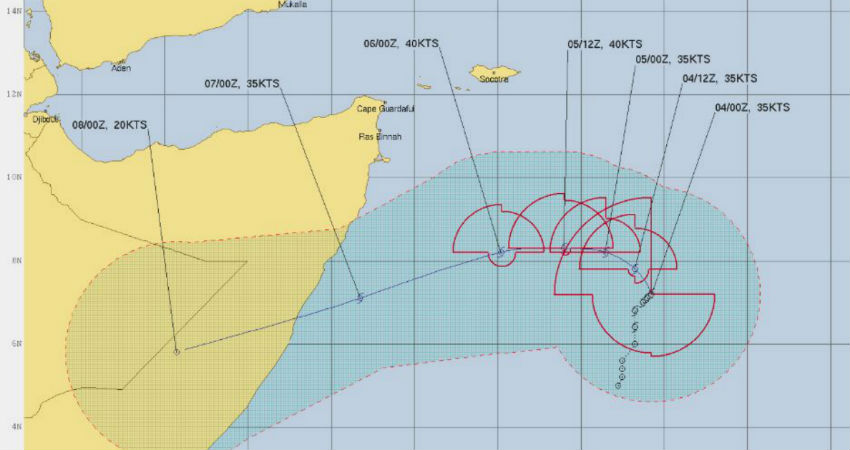 Cyclonic storm Pawan in the southwest Arabian Sea is now centred around 7.2 degrees North and 57.7 degrees East. This location is about 900 km away from the Somalia coast and is almost 1500 km from Djibouti, located in the Horn of Africa.

The system has moved very slowly, rather it has been practically stationary in the last 12 hours or so but then it is expected to move northwestward initially and then more westward. Also, before making landfall the system will move more in a westward direction.

The system is in the marginal environmental conditions which are limiting the rapid intensification. Hence, it is likely to remain as a Cyclonic Storm only without further gaining severity. The system is moving with a wind speed of 70 kmph and can gust up to 90 kmph. It is very likely to retain its strength for 48 hours but as it closes in, the system may lose strength on account of cooler waters and proximity to the land. Most probably the system will dissipate over the sea itself and will make landfall as a weak storm or as a Depression after 72 hours, around the morning of December 7.

Strong gusty winds packed with heavy rains will be a sight over the coastal stations of Somalia. While after crossing the coast, it is likely to weaken rapidly. This will be the 8th probable Cyclone in the Indian Seas in 2019. In the year 1975, eight storms were formed wherein only two of them were of Hurricane category and rest two remained as a Cyclonic Storm. Post this, the next record of eight cyclones was witnessed in the year 1987.

The naming of the Cyclones in India started after the devastating Cyclone in Odisha in 1999. Then the need for naming the cyclone was felt. Onil which took the shape of a Severe Cyclonic Storm in the Arabian Sea was the first Cyclone which was named in 2004.

Meanwhile, another possible Cyclone is brewing in the Southeast Arabian Sea which will become the ninth Cyclone of this season surpassing all the records created in the last 45 years. In the past 24 hours, the Well-Marked Low-Pressure Area over Lakshadweep and Southeast Arabian Sea has intensified into a Depression.