It has been a bitter winter season for the people of Delhi so far. December, the first month of the season itself was extremely cold with a couple of record-breaking days being observed in terms of declining temperatures.

January was comparatively calm as not many records were witnessed due to its already low monthly averages. But February seems to be treading the path of December. According to the data available with Skymet, the minimum temperature during the first 10 days of the month has been extremely cold.

In fact, it is the coldest first 10 days of February in the last ten years. The average night temperature has settled at 6.1 degrees Celsius, which is about 5 degrees below normal. This is 2 degrees below the earlier record of 8 degrees Celsius observed in 2018. This clearly explains how cold the capital Delhi has been in the month of February so far.

Out of the ten years, Delhi on six occasions has seen the average minimum during the first ten days of February settle in single digit. The following table will explain this. 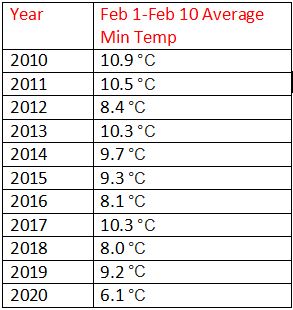 Meanwhile, the minimum temperature in Delhi recorded at the Safdarjung Observatory today was 5.9 degrees Celsius, which is 5 degrees below the normal average. This condition in the national capital is now going to change due to the Western Disturbance in the Western Himalayas. The minimums will rise by a degree or two making the nights a little comfortable.