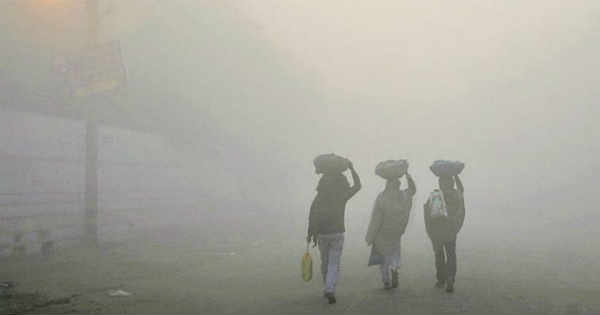 Winter rains have remained almost absent from Delhi NCR, this season. Though there was some very light rains on two occasions in December but it could not impact the weather. The national capital is now gearing up for some rains on the weekend.

According to Skymet Weather, a Western Disturbance has been affecting the parts of North India, with intensity being more over the hills and less over the plains. Neighbouring states of Punjab and Haryana saw some light rains during the last 24 hours but Delhi didn't witness any rain. However, we did not see any activity over Delhi-NCR but with the change in  wind pattern, minimum temperatures have increased bringing in relief from chilly nights.

On Wednesday morning, Safdarjung Observatory recorded minimum at 6.5°C and it has seen a rise of 2.5°C as compared to the previous day.

Very soon another Western Disturbance is likely to affect the hills January 4 onward. This would be stronger system than the previous one and would also be responsible for giving showers over Delhi-NCR by the weekend. Around January 5 and 6, Delhi might witness cloudy sky with light rains over widespread area. Although intensity of rains would not be much over the capital but  it would lead to significant drop in day maximums. We can also expect cold day conditions on these two dates.

These rains will set the pace for fog also and we can say that following week may commence with dense fog in large pockets.

For the month of December, we saw two different shades of weather for national territory, Delhi. The month started on a warmer note , especially the first few days were quite warm but eventually it entered cool zone with mercury dipping both for day and night.

December 18 onward, the minimums started touching the mark of 5°C and below, this stayed for many days. Whereas, on December 29, Delhi witnessed season’s coldest night wherein the minimums touched 2.6°C. The exception being that we didn’t see many foggy days, not even a single day we saw widespread fog which could usually affect the common life, affect road, rail and air traffic. However, fog was seen only in small pockets.

The month of January is rainier, as it records double the amount of rain in comparison to December. Normal rains for the month of January is 19.3 mm whereas for December it is 9.4 mm. January records the lowest minimum temperature wherein the average minimum is 7.6°C and maximum is 20.5°C.

The month of January sees more fog on account of weather activity and on account of pollutants also. January is the harshest month in terms of visibility. The pollution level sees a spike because the minimums are lowest during this time. The pollutants don’t disperse; therefore, the Air Quality deteriorates.