Delhi to remain warm and dry; next pre-Monsoon spell soon

After dampening Delhi with rains for almost three days, Delhi weather once again became dry making the Delhiites wait for showers to pour once again. In fact, even these rainy spells blessed Delhi and NCR after a lot of waiting.

In fact, light rains of 5 mm was recorded by the Safdarjung Observatory on Thursday, while the day became sunny on Friday. However, as of now, no downpours are anticipated to show up in Delhi and the adjoining regions. 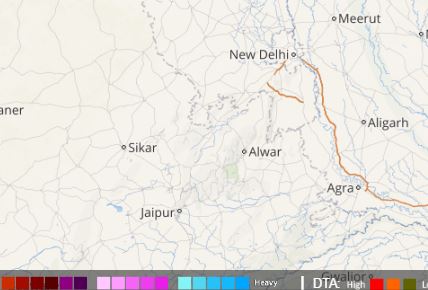 As per Skymet Weather, the trough which was close to Delhi and which had given rains in the recent past has now shifted towards the foothills of Himalayas. Moreover, the easterly winds that were prevailing over the region are also replaced by the westerly winds. On account of this, the weather over Delhi and NCR will become dry resulting in raising the mercury levels as well.

This dry spell is likely to prevail on June 9 and continuing until June 10. Thereafter, by June 11, another induced cyclonic circulation is likely to develop over Central Pakistan and adjoining Haryana and Punjab regions. A feeble trough from this system will also extend up to West Uttar Pradesh.

On account of this, another spell of isolated dust storm and thundershowers are anticipated over Delhi, Noida, Gurugram, Faridabad, and Ghaziabad. Though these pre-Monsoon activities will be highly localized and will be for a short duration thus not affecting the daytime high much. The temperatures will continue to touch 40°C.

Thereafter, breaking this monotonous dry spell, rain intensity is likely to pick up pace across northwest plains including Delhi and NCR once again around June 13-14.