Deluge all over but Monsoon 2018 still deficit 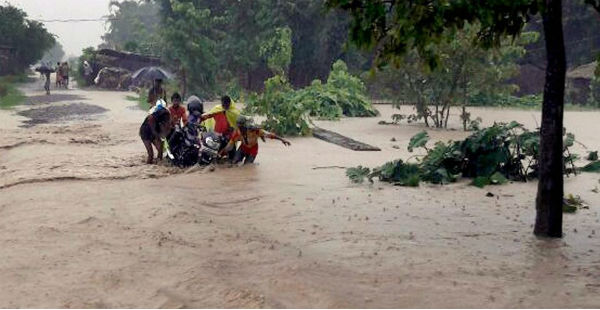 Monsoon 2018 made a grand entry, with country witnessing surplus rains during the first half of June. However, tables turned during the other half, with Monsoon rains taking a break. But few pockets did see vigorous Monsoon during that time.

But still, Monsoon remained deficit and June ended with countrywide rainfall deficiency of 5%. July too began on a deficit note, which did not improve and rather increased to 9% in the first week of July.

Beginning with Northeast India, wherein floods wreaked havoc across Assam and Tripura. Jammu and Kashmir also saw flood like situation. In the last few days, Mumbai has seen four consecutive days of 3-digit rainfall and now, South Gujarat and Madhya Pradesh have been witnessing heavy to extremely heavy rainfall. Despite all this deluge, Monsoon rainfall has been deficit.

Although last 3-4 days have seen Monsoon picking up pace leading to some improvement, but the countrywide cumulative rainfall still stands deficit by 6% as on July 13.

There have been several factors that have been responsible for this huge rainfall deficiency that too during this crucial month. Let us have a look at the few of them:

Slow progress of Monsoon: Though Monsoon made a grand entry and even progressed steadily till Mumbai, but progress became sluggish thereafter. In fact, it halted for quite a long time.

Prolonged weak Monsoon conditions: Country witnessed prolonged week Monsoon conditions as the Monsoon trough had shifted all along the foothills. During such situation, Northeast India generally rains heavily. However, Monsoon 2018 defied this feature as well and continued with the deficit rains.

Both Northeast and West Coast are the top two rainiest pockets during the Monsoon. Both the major contributors not firing together during Monsoon is not a common thing. As a result, the countrywide rainfall suffered a major loss and thus kept increasing.

Off-shore trough: The off-shore trough which is responsible for giving torrential rains along the West Coast remained active in patches only. Kerala and Konkan & Goa had taken a back seat for almost 10 days, though showed some revival signs during the last 24 hours. According to weathermen, rainiest pockets likely these taking backseat is a matter of concern, as it may take deficiency to whole new levels.

Saurashtra and Kutch: The region has remained highly rain deficit. In fact, the deficiency had once mounted over 90%. Places like these hold lot of importance. In comparison to other parts, normal average rainfall for the places like Saurashtra and Kutch and West Rajasthan ae quite low. And, even if these figures are not achieved they make quite a difference.

East India: All there have been series of the weather systems forming along the East Coast but they all have been week in intensity. Not only this, they have been tracking through central parts of the country. Thus, rains across East India had not been up to the mark.