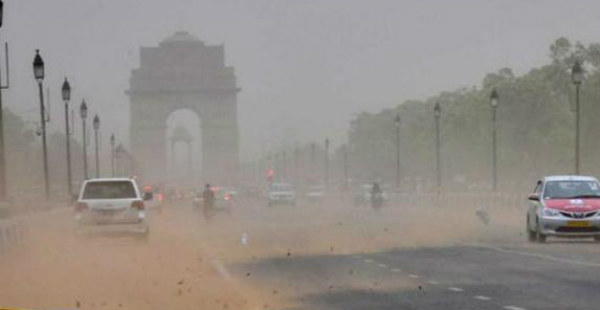 Delhi has been under the grip of extended spell of severe heatwave since last two weeks. Even though first half of May saw some weather activities in the form of dust storm and thunderstorm but since May 16, the weather over Delhi-NCR has remained completely dry and temperatures have been on rise.

Temperatures have been crossing 40 degrees mark over the entire region. The highest for the season of Palam was recorded yesterday at 46.5°C. Meanwhile, the highest maximum temperature of this season for Safdarjung was recorded on May 26 at 45°C.

Yesterday, Safdarjung observatory recorded its day temperature at 44.4°C. Ayanagar and Ridge also recorded their maximum temperatures too at 45.2°C and 44.2°C, respectively.

Now a significant change has been observed in the wind direction. Since last evening, the city has been experiencing easterly moderate winds, which are likely to bring pull down the day temperatures.

At 10:30 am on Tuesday, the maximum temperature was recorded at 40°C, while it was 35°C today. Therefore, we can say that a little relief from the ongoing hot weather will be observed on Wednesday.

Moreover, there is a possibility of localized dust storm/ thunderstorm activity during the later parts of the day today and tomorrow. These activities will be of short duration and not very impactful but may bring relief from hot days.

Thereafter, again the weather will go dry and warm as no significant weather activity is likely over Delhi-NCR in the first week of June.