Festival Gangasagar in East India to begin with a chilly note, temperatures to fall 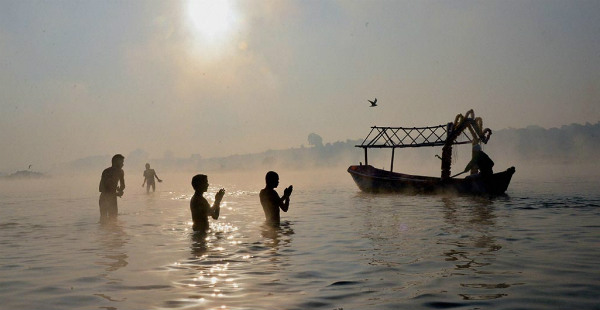 Seems like a prolonged winter has come to a halt over the eastern states of the country like Bihar, Jharkhand and Gangetic West Bengal. Due to the persistent flow of northerly winds over the region, the morning temperature remained below normal for a long period this winter season.

Due to a disturbance caused by the Anti-Cyclone over Odisha and adjoining Chhattisgarh, the minimums have risen and currently are marginally higher than the normal. Mist with shallow fog continued to prevail over these areas. This situation is expected to continue for coming 24 hours. As per Skymet Weather, the northwesterly cool and dry winds are all set to make a comeback and will be seen blowing over most of the eastern parts of the country.

Due to this a gradual drop in both day and night temperatures will be seen. Makar Sakranti is already on its way and it is expected that the chillness will be at its peak.

"Sab tirath bar bar, Gangasagar ekbar",  which literally means 'may we visit other holy places several times - but a visit once to Gangasagar is worth a life-time', keeping this in mind Hindus from all over the world, from Nepal, Thailand, West Indies, Canada, Japan, far from Australia and from every state of India reaches the confluence of Ganges at Sagar Sangam situated in southern part of West Bengal in India on the day of Makar Sakranti. Thus, keeping the weather scenarios in mind devotees who would be taking a dip in the holy Ganges will have to battle against severe cold weather in the early morning hours. They are advised to take adequate precautions. Day will be dry and sunny with cool winds in offing.