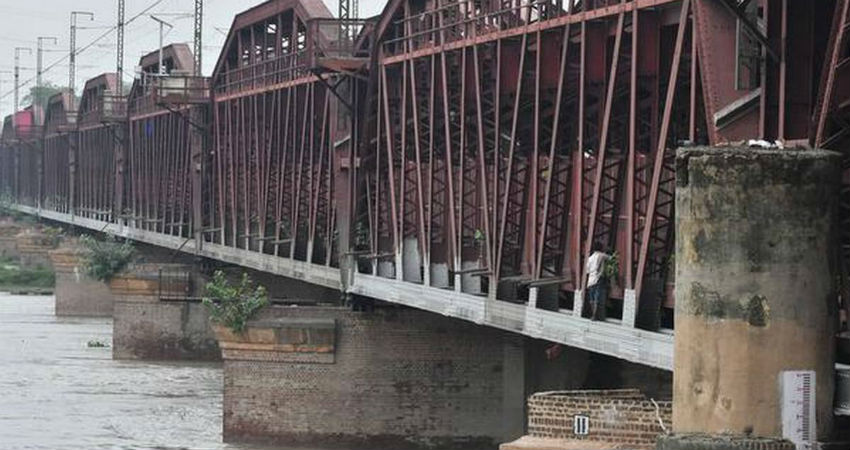 Updated on Aug 22, 09:38 AM: The level of water in the Yamuna river started receding on Wednesday. However, it is flowing above the danger level. With a reduction in the water levels, the rail traffic operations over the old Yamuna bridge were resumed on Wednesday at 4:25 pm with speed limit restricted to 20 kmph.

Updated on Aug 21, 12:15 PM: The water level at Old Yamuna Bridge also known as Loha Pul has reached 206.60 meters. According to Upper Yamuna Division, Central Water Commission, the water level may reach the peak value of 207.08 meter between 1 to 5 pm today.

Updated on Aug 21, 9:45 AM: After breaching its banks of 205.33 metres on Monday, Yamuna was flowing at 206.40 metres at 9 pm on Tuesday. The Yamuna flows through six districts of Delhi and low-lying areas prone to flooding. 30 boats have been deployed for accidental drowning cases.

More than 10,000 people living in low-lying areas along the Yamuna in Delhi were evacuated by government agencies as the river breached the danger mark on Monday evening, officials said.

"In view of the rising level of Yamuna, around 10,000 people have been evacuated from the floodplain and shifted to relief tents erected by the administration," a senior official said.

Addressing a press conference, the chief minister said that more than 23,800 people will be required to be moved out from low-lying areas, according to official estimates.

Updated on Aug 19, 8:00 PM: Yamuna flowing above the danger mark in Delhi

The Yamuna river is flowing above the danger mark in Delhi. The water level has reached 205 meters (the warning level is at 204.50 meters).

Delhi Chief Minister Arvind Kejriwal: Water level (of Yamuna river) is expected to cross the danger mark today evening. Water can reach here during the next two days with full force, all our officers and ministers are monitoring the situation 24x7.

Due to rising water-level of Yamuna river, vehicle movement on 'Loha Pul' (old iron bridge) over the river has been stopped.

The Delhi government on Sunday issued an advisory, asking people living in low-lying areas to shift to safer places, as the water levels in the river Yamuna inched close to the danger mark.

August is the rainiest month for national territory, Delhi. Monsoon flavour was seen during this weekend in Delhi and NCR when clouds were hanging around with persistent rain and drizzles with day temperatures below thirty degrees.

Parts of Delhi and NCR witnessed three rainy days in succession that is from August 16 to 18. The Palam observatory has witnessed more rains in comparison to the Safdarjung observatory. The Palam observatory is already inching towards it normal wherein till date 185 mm of rains have been recorded against the normal of 189 mm. These rains were due to the interaction of three weather systems, i.e. the Low-Pressure Area, Axis of Monsoon Trough and the Western Disturbance.

Now, the Low-Pressure Area has weakened but the Monsoon Trough is still close to Delhi which will cause clouding. The sky condition will be partly cloudy to cloudy with light chances of one or two odd showers, today and tomorrow. These will be passing showers of short duration only. With this, there will be a rise in temperature by two degrees or so.
As the water level in the Yamuna River neared warning level, the Delhi government sounded a flood alert for the city and asked people living in the low-lying areas to move to safer places as the water level in the Yamuna river is expected to cross the danger mark, officials said.

An official said the Yamuna River was flowing at 203.37 metre on Sunday evening and its water level is expected to rise further in the next 24 hours after 8.14 lakh cusec water was released from the Hathini Kund barrage in Haryana at 5 pm.