Flood like situation to remain grim over Jalore, Pali, Barmer 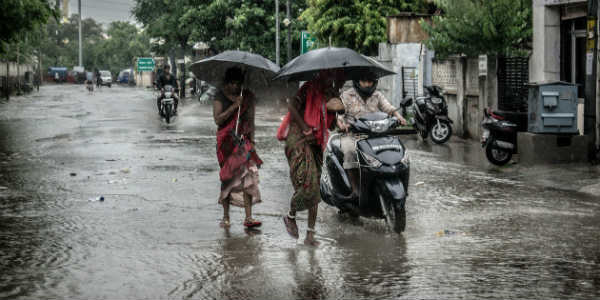 The Southwest Monsoon has remained active to vigorous over Rajasthan, since last many days. Several districts of Rajasthan have been experiencing moderate rains along with few heavy spells. Due to which, flash floods have been wreaking havoc over the state. Many villages in Jalore, Pali has been flooded, and some roads have also been washed off. While the situation is likely to improve over southern districts of Rajasthan, northern parts will continue to suffer.

About 1000 of people have been rescued from Jalore, Pali, Barmer and Rajsamand districts of Rajasthan where heavy rains have triggered floods. Though the water is retreating in flood-hit areas, main roads connecting Sirohi, Jalore and Pali are still blocked. In a span of last 24 hours from 8:30 am on Saturday, Mount Abu recorded 47 mm of rainfall, followed by Barmer 33.8 mm, Jalore 21 mm, Jodhpur 20.6 mm, Jaisalmer 17.6 mm, Ajmer 14.1 mm, Jaipur 9 mm, Pilani 2.2 mm, Bundi 2 mm and Udaipur 0.6 mm.

The reason for these rains can be attributed to a cyclonic circulation which is seen persisting over East Rajasthan. The axis of Monsoon trough is also seen passing across the northern parts of the state. Due to this, northern districts may continue to receive moderate spells along with few spells at one or two places. Whereas, many southern districts of Rajasthan will see reduced rainfall activities within the next 24 to 48 hours.

Click here to check the Live Lightning and Thunderstorm status over Rajasthan: