Fog layer to thin down over entire country in coming days 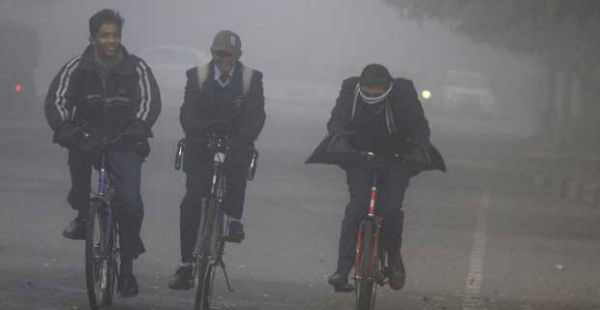 Very dense to dense fog is being witnessed across the plains of North India as well as Indo-Gangetic plains inclusive of Sub-Himalayan West Bengal since past many days.

Visibility in Ambala and Gopalpur was less than 200 meters, while Jammu, Dehradun, Gwalior, Gorakhpur, Varanasi, Bhagalpur and Purnea saw lowest visibility at less than 500 meters.

Now, the winds have been strengthening over the aforementioned areas, which will act as an obstacle and not allow the moisture to settle down at ground level regardless of low temperatures. The moisture will get drifted away along with the strong winds.

Hence, the thickness of very dense fog layer will become wane as time progresses. However, moderate to dense fog will occur in pockets during the next 24 hours over Delhi, North Rajasthan, southern parts of Uttar Pradesh and Bihar.

Meanwhile, dense fog will continue over some portions of Punjab, North and West Haryana, North Uttar Pradesh, North Bihar and Sub-Himalayan West Bengal. Thereafter, here too the fog layer will be fading, with the occurrences of shallow fog for short duration.

Moderate to dense fog will be seen along the foothills of Northeast Bihar, Sub-Himalayan West Bengal and parts of Northeast India in the wake of weak winds over these extents.

Furthermore, shallow to moderate fog is anticipated over parts of Coastal Odisha, Coastal Andhra Pradesh and North Coastal Tamil Nadu during the next 24 hours as temperatures are low over this chunk of the country.

Last of all, Madhya Pradesh would witness shallow to moderate fog during the next 24 hours, thereafter the fog layer is expected to thin down.