Forecast of rain in Ahmedabad, Gandhinagar, Baroda and parts of North, Central Gujarat 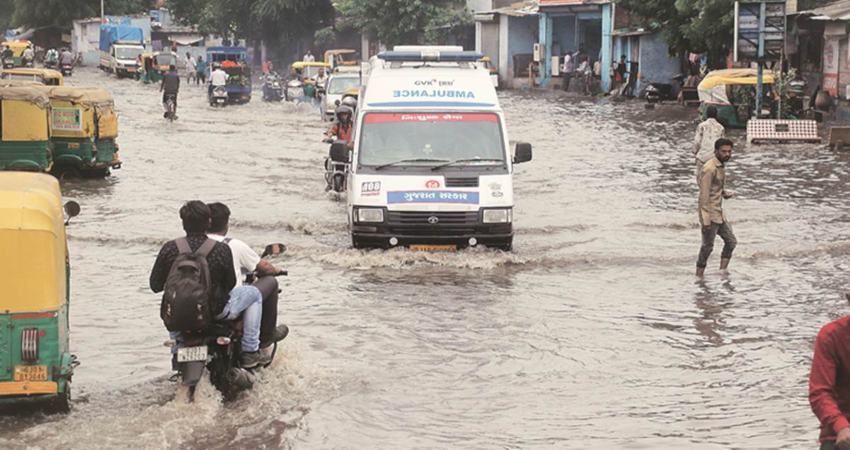 It has been a good month for Gujarat as far as rain is concerned. Short spells of weather activity have been happening in the state since the start of August. And this is exactly the state of the weather in Gujarat at the moment.

Light rain is being observed in some parts of Gujarat for the last 24 to 48 hours particularly in the northern and the central parts of the state. For instance, Ahmedabad and Deesa in a span of 24 hours from 8.30 am on Wednesday have recorded 5.6 mm and 2.7 mm of rain, respectively.

However, in the next 24 hours, the intensity and spread of rain will increase. Moderate intensity rain may be observed in Gandhinagar, Baroda, Patan, Banaskantha along with Ahmedabad and Deesa.

These rains will be an outcome of the Low-Pressure Area in West Madhya Pradesh and Rajasthan extending upto Gujarat. In the next 24 hours, this system will move deeper into Gujarat giving moderate rains in north and central parts of the state. Thereafter, the activity will become feeble though light rain will continue to be observed for the next couple of days.

On the other hand, the weather in Saurashtra and Kutch will be almost dry. Not much is expected in the region during this period. However, very light rain can be witnessed in some places.

Monsoon rains have overall performed very well for Gujarat so far. If we look at the rainfall data available with Skymet, the state is in excess of 22%.

Any information picked up from here should be attributed to Skymet Weather.

Weather on Twitter
Rains made a visit over multiple regions of Northwest India yesternight. While #Delhi’s Safdarjung observatory reco… t.co/ARHEGYnuQg
During the next 24 hours, rain and thundershowers may continue in parts of #Punjab, Haryana, West and Central Uttar… t.co/ZLlwl1pe9D
Have a look at the day and night #temperatures for major cities of #India on February 21. t.co/yHzh3egtA9
A Western Disturbance is over #JammuandKashmir. It will gradually move away eastwards. An induced Cyclonic Circulat… t.co/2r9qLU93y3
During the last 24 hours, fairly widespread rain and thundershowers occurred in #Punjab, Haryana, West and Central… t.co/Y1AYte5LGJ
बिहार, झारखंड, गंगीय पश्चिम बंगाल और ओडिशा के कई हिस्सों में वर्षा और गरज के साथ बौछारें पड़ने की संभावना है।… t.co/aJus3P4cwm
At the same time, good rains are being forecast for North #Chhattisgarh. Places like Koriya, Korba, Sarguja, Ambika… t.co/tqEgUDS8i5
#Marathi: जम्मू-काश्मीर, लडाख, हिमाचल प्रदेश आणि उत्तराखंडमध्ये एक दोन ठिकाणी पाऊस आणि हिमवादळ सुरू राहण्याची अपेक्… t.co/k1iDEiTmMq
In the presence of moderate to strong winds, we expect #Delhipollution to improve further during the next 24 to 48… t.co/8KsuZYd7kz
Rain and thundershowers will continue over #Punjab, #Haryana, Delhi and many parts of West Uttar Pradesh until the… t.co/rrMFbqY4Mk
Follow us @skymetweather