Fresh spell of heavy rain and snow in Kashmir, Himachal, Uttarakhand from January 10 to 13 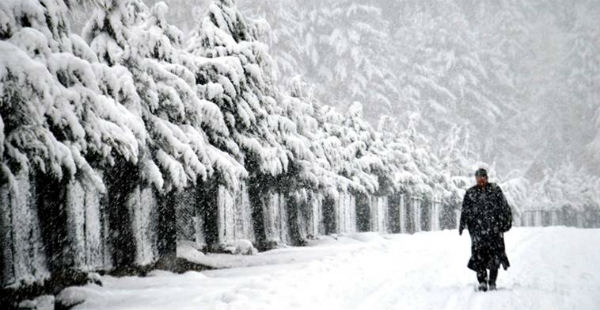 The year 2019 began with widespread rain and snowfall activities over the hills of North India. In fact, many parts of Jammu and Kashmir, Himachal Pradesh and Uttarakhand have been receiving good rain and snow since January 1, with short breaks in between.

These on and off widespread rain and snowfall activities have been attributed to the successive active Western Disturbances approaching the Western Himalayas. The consequent snowfall activity since last many days have already brought life to standstill across the hilly states, particularly Kashmir. Several arterial roads and highways have been shut, while schools are also closed.

Now another active Western Disturbance is expected to affect Jammu and Kashmir region by January 10 afternoon. This Western Disturbance will persist for the coming three days between January 10 and 13. Thus, we can say that, scattered rain and snow is likely to commence over Jammu and Kashmir during the next 24 hours. Gradually, Himachal Pradesh and parts of Uttarakhand will also start receiving rain and snowfall.

Intensity of snow will be heavy on January 12 and during that time we expect few heavy spells of snow to occur over many parts of Jammu and Kashmir and Himachal Pradesh.

Heavy snow may also cause disruption to people’s day to day life such as road blockages, power cut etc. Moreover, due to continuous snowfall, chances of avalanche have also increased over many districts of Jammu and Kashmir.

The avalanche prone districts of Jammu and Kashmir include Poonch, Rajouri, Reasi, Ramban, Doda, Kishtwar, Udhampur, Anantnag, Kulgam, Budgam, Ganderbal and Leh. However, January 14 onwards, weather will clear up, as the Western Disturbance will move away eastwards.

It would be the time, when we can expect some relief extreme chilly weather conditions. Clear sky would lead to rise in day maximums.

Weather on Twitter
Moderate showers are likely in #Chhattisgarh for another 24 hours. In the meantime, East Madhya Pradesh may receive… t.co/MVSKXNOlsN
On February 24 and 25, we expect fairly widespread rain and thundershowers in West Bengal, #Odisha and #Jharkhand.… t.co/P4c5Us2EqF
Scattered rain and thundershowers are expected to continue in East #MadhyaPradesh and #Chhattisgarh until February… t.co/kYuwxCvHZ5
#Rain and snow will commence in #JammuandKashmir, #Ladakh, #HimachalPradesh, #Uttarakhand on February 28. On Februa… t.co/mr0Ak4v8A9
Light rain and thundershowers are expected in #Uttarakhand, parts of Northwest #Rajasthan and Southwest #Punjab on… t.co/IVWxsVVOBM
Let us take a look at the #weatherforecast for the week. t.co/6GDd7yj8HS
Good #Rain and thundershowers are likely in Odisha and #WestBengal. The intensity is likely to be more in #Odisha a… t.co/S2ideLNDaO
सोमवार को देश के मैदानी भागों में सबसे ठंडा स्थान रहा हरियाणा का करनाल शहर। जहां न्यूनतम तापमान 9.0 डिग्री सेल्सियस… t.co/RtQsjW9aJe
अगले 24 घंटों के दौरान झारखंड और छत्तीसगढ़ में कई जगहों पर हल्की से मध्यम बारिश के साथ कुछ स्थानों पर भारी बारिश हो… t.co/P8TUJmiBxl
During the next 24 hours, light to moderate rain and thundershowers with isolated heavy spells may occur in #Odisha… t.co/3sxXjleNrv
Follow us @skymetweather