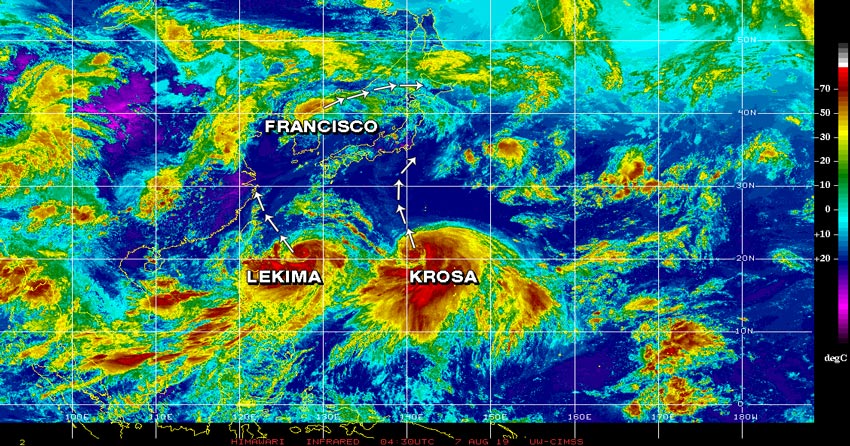 The storms or the Typhoons have varied tracks. Like the Storm Wipha moved across the Asian region that is Vietnam, Thailand, Myanmar and later on merged in the Bay of Bengal.

An active pattern for tropical cyclones continues in the West Pacific as Tropical Storm Francisco brought heavy rainfall to South Korea after making landfall in southern Japan on Tuesday morning. As per the Japan Times, Francisco injured at least two people and caused significant travel disruptions.

Aside from flooded roadways, travel was hampered with than 200 flights canceled across southern Japan. Kyushu Railway was also forced to cancel service across many of its lines.

Francisco will remain a tropical storm as it moves into the Sea of Japan by late Wednesday.

Francisco will not be the only tropical threat for Japan and South Korea this week. Both Typhoon Lekima and Tropical Storm Krosa could bring impacts to the region as early as this weekend with further impacts possible next week.

Tropical Storm Lekima organized into a tropical storm on Sunday. It will shortly become a typhoon of Cat I. A general northwest track over the next several days will keep Lekima in the open waters of the Philippine Sea, limiting impacts to land but allowing it to gain size and strength. It is centered at 20.2°N and 128.2°E.

Additional strengthening is forecasted from Thursday into Friday, allowing Lekima to become a large and powerful typhoon of Cat II in the Pacific Ocean.

There is a possibility that Lekima could go through a period of rapid intensification from Thursday to Friday, which could allow the storm to become even stronger. It is very likely to reach the East coast of China in the next three to four days.

The new storm in the Pacific is Krosa which at present is positioned at 20.6°N and 141.6°E. As Krosa tracks to the north and northwest it has the potential to become a Typhoon of Cat I in 24 hours. Eventually, in 72 hours, it might even intensify into a Typhoon of Cat II. This system will move slowly but will intensify and the beauty of this storm is that it will remain over the sea only.

The systems in the Pacific generally preclude the formation of any system in the Bay of Bengal. Also, after the Depression wipes off then the chances are very likely that Monsoon might go mild somewhere around August 10.