Heatwave to reappear over Delhi-NCR as mercury set to rise 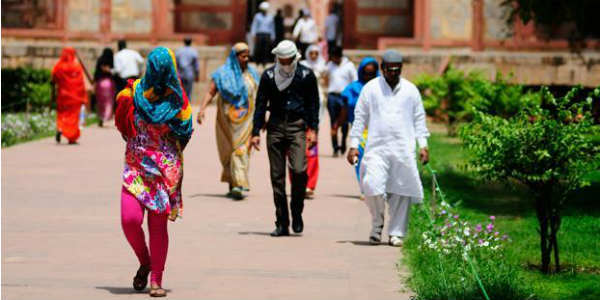 The national capital region was observing on and off pre-Monsoon activities since last week. On Sunday, Delhi-NCR has witnessed good spell of showers during the evening hours.

In fact, on Monday, the weather conditions became extremely pleasant, leading to intermittent light rain and thundershowers with overcast sky. This had led to significant drop of 11 degrees in maximum temperatures that settled at 29.6°C. It was the coolest day of the season.

Though, heavy spells were not witnessed but these showers brought much-needed relief from the scintillating heat that Delhiites were victim of. These rains forced the residents to move out of their homes and enjoy the lovely weather.

However, now the trough that was running along the national capital has become less marked. In wake of this, maximum temperatures are expected to once again scale up and reach above the normal levels, predicts Skymet Weather.

Check out the latest lightning and thunderstorm status across India

So, the pre-Monsoon activities will take a backseat and heatwave conditions will again make a comeback over the national capital. This would result in hot and dry weather conditions for next 2 to 3 days. Day temperatures will now settle in the range of 42C to 44C.

Not only this, the trough has left lot of moisture in the atmosphere, which has increased the humidity levels. This will further add to the discomfort of people.

However, some relief is in sight as another spell of dust storm, rain and thundershowers are expected over the entire northwestern plains including Delhi-NCR by May 28.