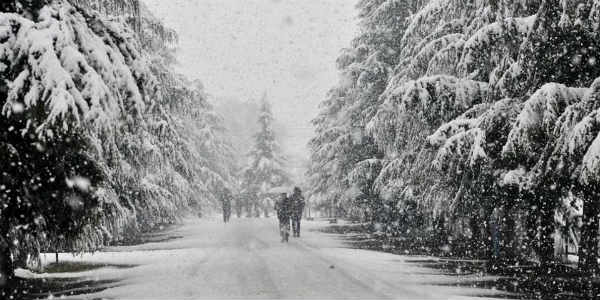 The hilly states of North India are all set to witness a good spell of rain and snow . In past 24 hours, moderate to heavy snowfall has occurred over many places of Jammu and Kashmir which is expected to continue for next 24 hours as well and thereafter it will start receding.  States of Himachal Pradesh and Uttarakhand are likely to witness rain/snow today onward and will continue for good 48 hours. However, in last 12 hours Srinagar witnessed rain/snow of about 25 mm, Jammu 15 mm rains, Manali 7 mm, ,Banihal 10 mm , Qazigund 23 mm, Kupwara observed 42.5 mm, Pahalgam 40 mm, Gulmarg 27 mm, Kalpa- 4 mm while Gurdaspur in Punjab recorded 3.9 mm of rain.

The upcoming rain and snowy spell will be attributed to the presence of a Western Disturbance currently lying over North Pakistan and it's adjoining areas. The upper air system is extending up to 4.5 kilometres above sea level.  Moreover, residents have been advised to not go to the higher reaches of the hills.

The snowy spell is expected to not only affect cities of Srinagar, Pahalgam, Gulmarg, but also touristy delights of Shimla, Kullu, Mandi, Sirmaur, Chamba, Lahaul-Spiti and Kinnaur during the next 24 hours. As per Skymet Weather, hailstorms can be seen over the southern parts of Jammu and Kashmir, Himachal Pradesh and Uttarakhand. The plains of these regions will also witness Cold Day conditions, leading to fall in maximums.

Another Western Disturbance is coming up around January 8, which will cause some rain and snow over the hilly regions until January 9.

Not only this, the possibility of avalanches and landslides over higher areas cannot be ruled out as well. Thus, while weekend calls for a trip to the nearby destinations. It is highly advisable for tourists planning a trip to these areas should hold it for a little while at least as touristy ventures might not be a good area right now. In fact, this entire week looks like a no no for the hills.

However, after the entire snowfall episode comes to an end, tourists can pay the hills a visit and enjoy the snow clad destinations and the picturesque mountains around them.